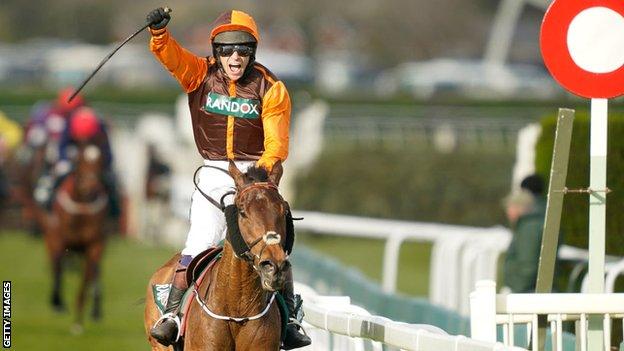 Final furlongs don’t get better than this. An amateur jockey, in his last competitive ride, winning the world’s most famous race.

“It’s a dream. It won’t sink in for weeks – it feels like a fantasy, and I just don’t know what to say.”

That was the reaction of Sam Waley-Cohen after landing the Grand National at Aintree on 50-1 outsider Noble Yeats, bought by his father Robert two months beforehand.

The rider, who only announced his decision to quit the saddle two days earlier, paid tribute to his younger brother Thomas who died aged 20 of bone cancer in 2004.

“These days are big family days, and obviously Thomas isn’t with us, so you always think about him on these days. I still always ride with his initials on my saddle. I do think he is sitting on my back,” he said.

He was royally congratulated on social media by his friends, the Duke and Duchess of Cambridge, who he has been credited with getting back together after a split in their younger days – although he is keen to downplay the suggestion.

“I don’t think it has any connection to them but I think as a general philosophy, hoping for the best and living full of hope is a good way to live your life,” he said.

Sam went to boarding school with Kate Middleton, and she helped raise funds for a ward in his brother’s memory at Oxford’s John Radcliffe Hospital.

“When you lose someone you love when they are young you try to make the most of life,” he added.

Away from racing, Waley-Cohen is a successful entrepreneur with a chain of 250 dental practices in five countries, employing a total of 4,000 people.

Despite only having around 30 rides a year in races against professionals, he has a remarkable CV.

He won the King George VI Chase twice and also the Cheltenham Gold Cup with Long Run a decade earlier in his father’s brown and orange silks.

Waley-Cohen, a father of three, went into the 2022 Grand National as the jockey with the best record – having won six other races over the fences.

Now he is the first amateur rider to have won both the Gold Cup and National, and he completed the double on a horse aged seven – the youngest winner since Bogskar 82 years earlier.

He resisted the challenge of runner-up Any Second Now on the run-in, with a sting in the tail a nine-day suspension (which he seems unlikely to serve in retirement) and £400 fine for using his whip above the permitted level after the last fence and in the incorrect place on the run to the line.

While there were celebrations for the Noble Yeats team, there was one equine fatality, with Discorama suffering an untreatable pelvic injury when running on the flat between fences.

Winning trainer Emmet Mullins, the nephew of champion Irish trainer Willie Mullins, was having his first runner in the Aintree contest.

“It’s a great start and it’s going to be hard to keep this strike rate up,” he said.

The winning jockey’s love affair with Aintree began more than 30 years earlier when he was captivated by the red and white colours of a Grand National runner.

“He used to ride his rocking horse and pretend he was riding Auntie Dot – that’s how far back it goes,” said his father Robert, a former chairman of Cheltenham Racecourse.

Sam thanked his father for his “unwavering” love and support over 23 years of race riding, including when some suggested he should employ a professional, rather than amateur jockey.

Waley-Cohen had been second, fourth, fifth and eighth in the National before, but despite his triumph, it may not have been the wildest of retirement parties.

When asked how he would celebrate on Saturday night, Waley-Cohen said: “Probably have a cup of tea. It’s just all so surreal.”

In a story worthy of Hollywood, he suggested actor Dominic West when asked who might play him in any subsequent film.

Quite appropriate really, for the man whose greatest career triumph came down to the wire.