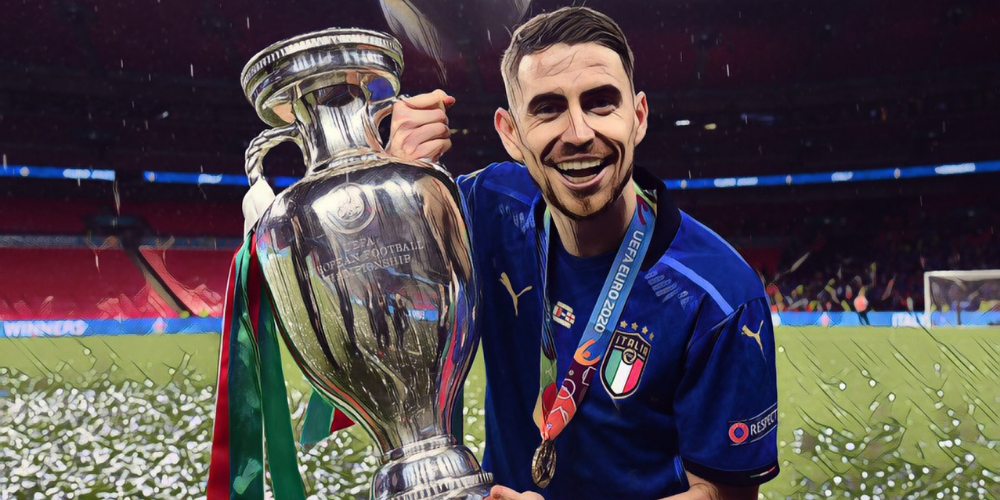 Italy’s victorious Euro 2020 campaign has capped a stellar season for midfielder Jorginho, with the Chelsea star completing a rare European double for club and country.

Jorginho followed Champions League success at club level by winning the European Championship with the Azzurri this summer, becoming just the tenth player to win both competitions in the same year.

Following the 29-year-old’s incredible achievements in 2021, we look at the ten players to have secured a rare European double.

Regarded as one of the greatest Spanish footballers of all time, Luis Suarez formed part of history making teams in the mid sixties for both club and country.

Having won two league titles and the Ballon d’Or during a spell with Barcelona, Suarez signed for Inter Milan in 1961 and helped the Nerazzurri to a wealth of success over the course of the next decade.

The midfielder won three league titles and back-to-back European Cups, the first of which was followed by a maiden European triumph for Spain who were crowned winners of the 1964 European Championship.

Spain hosted the four-team tournament, beating the Soviet Union 2-1 in the Madrid final with Suarez later named in the Team of the Tournament before finishing runners-up to Manchester United’s Denis Law in the Ballon d’Or voting.

The Netherlands secured their first major tournament success as a talented side won Euro ’88, Marco van Basten’s sensational volley against the Soviet Union the defining image of the tournament.

Van Basten finished as the tournament’s leading scorer and scored a hat-trick against England in the group stage, though the AC Milan forward was ably supported by a quartet of players who had helped PSV to huge success the previous season.

Hans van Breukelen, Ronald Koeman, Berry van Aerle, Gerald Vanenburg all formed part of the PSV side who secured a historic treble-winning season in 1987/88, winning the Eredivisie and KNVB Cup before beating Benfica 6-5 on penalties following a goalless draw in the European Cup final.

Jorginho became the third Chelsea player to achieve this rare European double, with Fernando Torres and Juan Mata having also secured the feat nine years ago.

Torres and Mata formed part of the Chelsea team which won the Champions League for the first time in 2012, defeating Bayern Munich on penalties after Didier Drogba’s late equaliser had secured a 1-1 draw.

The Spanish duo also formed part of a La Roja side that made unprecedented international history, winning Euro 2012 in impressive fashion to win a third consecutive major tournament, after successes at Euro 2008 and the 2010 World Cup.

Torres and Mata both scored in the 4-0 final thrashing of Italy after coming off the bench.

Cristiano Ronaldo and Pepe became the eighth and ninth players to win the Champions League and European Championship in the same season, achieving the feat in 2016.

The duo then formed part of the Portugal side that won the nation’s first ever major tournament, overcoming a slow start at the finals in France to emerge victorious.


Pepe produced a magnificent defensive display as the Portuguese upset the host nation in the final, with Ronaldo agonisingly watching on from the sidelines after being substituted during the first half through injury.

Eder’s goal in extra-time secured a historic victory for Fernando Santos’ side, Ronaldo later claiming a fourth Ballon d’Or following his performances for club and country.

Jorginho’s success this summer saw the midfielder become the tenth player to join this list, following Chelsea’s Champions League success with victory at Euro 2020 with Italy.

The 29-year-old proved a crucial figure for both sides in their pursuit of major trophies, sitting as the deep-lying creative fulcrum and shielding the backline in fine fashion, making more tackles and interceptions combined than any other player in both competitions.

Jorginho set a new record for the most interceptions made at a single Euros (25) since 1980.

What a season he’s had 👏 pic.twitter.com/fOTUdA3n0L

At Euro 2020 he was an irreplaceable figure at the heart of an impressive Italian side, covering more distance than any other player and setting a new European Championship record of 25 interceptions.

Club teammate Emerson Palmieri was also part of both trophy-winning squads, though is not included after not featuring in Chelsea’s Champions League final win over Manchester City.