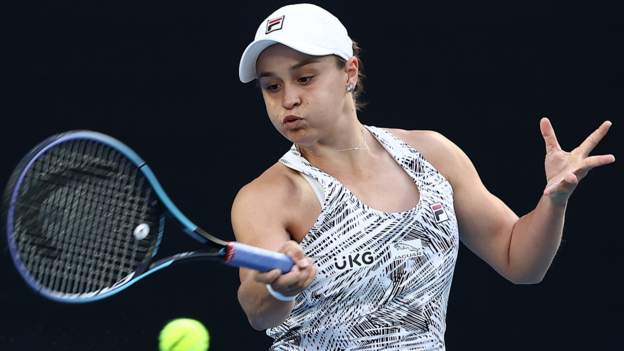 World number one Ashleigh Barty thrashed Lesia Tsurenko 6-0 6-1 in just 54 minutes to reach the second round of the Australian Open.

Home favourite Barty won 11 games in a row before the Ukrainian finally got on the board on Rod Laver Arena.

She will face Italian qualifier Lucia Bronzetti next.

Barty paid tribute to her indigenous Australian heritage and the crowd support in her on-court interview.

“This is beautiful – it has felt like it’s an eternity since I was back on this court,” she said.

Barty broke qualifier Tsurenko at the first opportunity and then staved off two break points in her next game to consolidate her lead.

She was dominant throughout, closing out the first set in 24 minutes before racing into a 5-0 lead in the second.

Tsurenko, who gave Barty a scare in the opening round in 2020, saved two match points on her own serve to force Barty to close out the match.

The Australian showed her only sign of nerves as she missed a further two match points before rattling down an ace to wrap up an emphatic victory.

Barty’s dominance was underlined by the statistics: she hit 14 winners to Tsurenko’s four and won 73% of first-serve points to keep herself firmly on top.

“I did a good job in adjusting but overall I felt like I enjoyed it and that’s the most important thing,” Barty added.