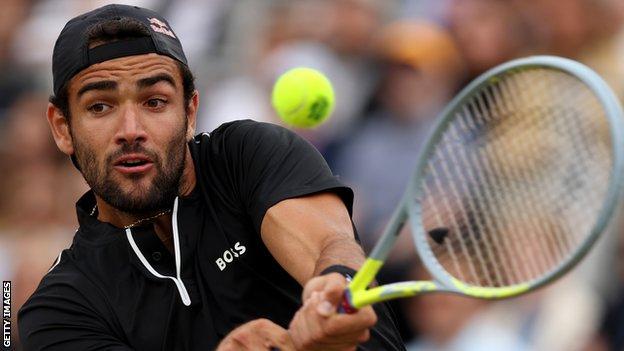 Matteo Berrettini underlined his Wimbledon credentials by beating Filip Krajinovic to claim the Queen’s title for a second year in a row.

Berrettini has now won 20 of his past 21 grass-court matches, with his sole defeat coming against Novak Djokovic in the Wimbledon final last year.

Berrettini only returned to the tour in Stuttgart last week after having surgery on his right hand and admitted he had not been sure what form he would find.

He struck his chest in celebration and roared to the crowd after converting his first match point with an ace out wide.

He then went over to celebrate with his father, who flew in to London for the match, and his team, who covered him in water in celebration.

“I forgot how heavy the trophy was,” Berrettini joked in his on-court interview.

“The last thing I expected was to come back from surgery and win two titles in a row.”

He will be among the favourites for Wimbledon, which begins on 27 June.

By contrast, Krajinovic has lost all five finals he has contested – but he will leave Queen’s Club with some positives, having failed to win a main draw ATP match on grass before this week.

“I really hated to play on grass before this tournament but this can change,” he said.

“Playing a final here is very special and I feel now that I want to play more and more, so we’ll see how it goes.

“You guys helped me so much and I felt like I was playing at home, so thank you very much for that.”

A heavy favourite for the match given his grass-court credentials, Berrettini started well, creating four early break points before taking the fifth with a backhand volley.

However Krajinovic, who has visibly grown in confidence as the week progressed, hit straight back with a volley of his own to retrieve the break.

The two were evenly matched but with Berrettini having such a strong serve – he won 79% of points behind his first serve throughout the match – the pressure was always on the Serb.

A netted backhand from Krajinovic handed Berrettini the break for 6-5 and the Italian did not blink, with a huge forehand winner into the corner of the court securing the set.

The Italian kept the pressure on in the second, breaking to love for a 3-2 lead, with nerves only showing when he slipped to 15-30 down as he served for the match.

However, he reeled off the next two points, before raising his arms in triumph as his victory was confirmed.