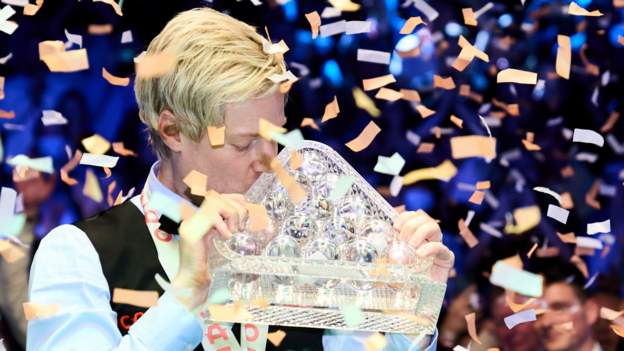 Masters champion Neil Robertson is using NFL legend Tom Brady as his inspiration as he tries to cement his place among snooker’s greats.

“[Winning multiple world titles] is the last thing to tick,” said Robertson, who won his only world crown in 2010.

“It’s not too late to become a three or four-time world champion. Look at Tom Brady, he is a massive inspiration.”

Quarterback Brady has guided the Tampa Bay Buccaneers into this season’s NFL play-offs as he chases an eighth Super Bowl title at the age of 44.

“When you have people like that carrying the flag you can achieve anything well into your 40s. You just have to stay confident and keep believing,” Robertson added.

He also knows having the right people around him is key to winning the sport’s biggest prize once more when the 2022 World Championship gets under way at the Crucible Theatre in Sheffield on 16 April.

“I have to stop making excuses about how tight the venue is,” said the world number four.

“I have maybe been too stubborn at that event where I haven’t surrounded myself with enough of the right people.

“It is great winning a tournament by yourself, where you are your own mentor or psychologist, but for the World Championship it is different and you need a good team around you because there are so many sessions.”

Robertson is the sport’s most successful non-British player and victory in London was his sixth Triple Crown triumph, having also won three UK Championship titles.

He is seventh on the list of players with most Triple Crown victories, trailing the likes of Ronnie O’Sullivan (20), John Higgins and world number one Mark Selby (both nine) among current players.

He has won 21 ranking titles in his career but his record at the Crucible is poor, reaching just one semi-final since lifting the trophy 12 years ago.

“I have the confidence to do it, I just need to have the right mindset,” said Robertson.

“I love my stats in sport, especially snooker, and know that this is another Triple Crown, my second Masters. I have three UKs and one World Championship sitting by itself.

“I have to win multiple world titles now to be considered among the handful of greats.

“I know how well respected I am in the sport [but] you have to win multiple world titles to be in the top four or five discussions, for sure.”

‘Maybe he has underachieved’

Robertson was not fully firing in Sunday’s final but still managed to coast to a commanding victory, punishing errors made by an out-of-sorts Hawkins.

He has been the form player this season having also won the English Open in November and finished runner-up to Ronnie O’Sullivan in the World Grand Prix.

Since winning his first ranking title in 2006, Robertson has an incredible record of winning at least one title in each year since.

Six-time world champion Steve Davis said on BBC Two: “Even though he does not have the CV of the likes of Ronnie O’Sullivan, Mark Williams or John Higgins for the major Triple Crown events, his standard is up there with them.

“He is such a strong competitor and similar to UK champion Zhao Xintong, he is in the frame for the World Championship. Maybe he has underachieved but it shows how many great players there are in the game.”

John Parrott, the 1991 world champion, added: “He is a fabulous competitor and one of the greats of all time.

“But he will want to put that World Championship record right. It sounds churlish to say he has only won it once but he is good enough to win more than one.”