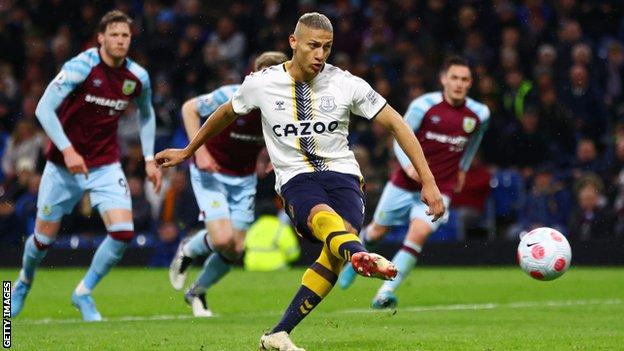 Maxwel Cornet scored a late winner to earn Burnley a vital win over fellow strugglers Everton in their bid to remain in the Premier League.

The Ivorian capitalised upon two poor errors by Jordan Pickford and Ben Godfrey in the 85th minute to earn Sean Dyche’s side only their fourth league win of the season.

It lifted them to within one point of safety behind Frank Lampard’s fourth-bottom side.

In an entertaining and feisty encounter in wet and blustery conditions, the hosts took a 12th-minute lead when an unmarked Nathan Collins scored at the back post from a corner.

But the advantage did not last long as Richarlison stroked home the first of two penalties in the 18th minute when Ashley Westwood was adjudged to have tripped Anthony Gordon.

His second came four minutes before half-time and was tinged with controversy.

Despite Vitaliy Mykolenko being tripped by Aaron Lennon, referee Mike Dean did not think it amounted to a spot-kick, until he was advised by the video assistant referee to review it on the monitor and then overturned his decision.

The home support showed their disgust with that call, but their mood improved after the break when a great burst by Charlie Taylor led to him crossing for Jay Rodriguez’s equaliser in the 57th minute.

And although Everton created the better chances as the second half wore on, Cornet’s seventh goal of the season could not have been more crucial as it sent the home fans wild.