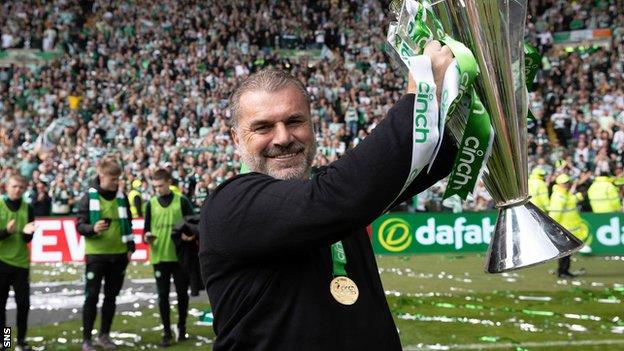 Celtic will start their Scottish Premiership title defence at home to Aberdeen on Sunday, 31 July, with Livingston v Rangers launching the season the previous day at 12:00 BST.

Hibs entertain Edinburgh rivals Hearts on the second weekend of the season.

The first Old Firm derby is on 3 September with Rangers at Celtic Park.

The Premiership has a five-week break for the World Cup after the 16th round of matches on 12 November and resumes on 17 December – the day before the final in Qatar. The lower leagues continue during the shutdown.

Cove Rangers, having secured a third promotion in four years, play their first-ever Championship game when they welcome Raith Rovers on the opening weekend.

Queen’s Park – back in the second tier for the first time since 1983 – begin away to Inverness Caledonian Thistle, while relegated Dundee face visitors Partick Thistle.

In League 1, newcomers Kelty Hearts welcome fellow promotion winners, the rebranded Edinburgh FC, and Dunfermline Athletic begin their bid to bounce back from relegation at home to Alloa Athletic.

Why is the World Cup causing a fixture headache?

Given Scotland have not qualified for the Qatar showpiece in November and December, the upheaval might seem a touch unnecessary now, but the Premiership shutdown will remain in effect for a variety of logistical and commercial reasons.

Chief among those is that the group stages of the European club competitions must be completed a month earlier than normal and that Celtic, Rangers and Hearts are all guaranteed to be involved.

The latter will play on Thursday evenings, so must have six Premiership matches on Sundays. Fine. But what if their domestic opponents are one of the Old Firm, who might have a European engagement the following Tuesday? It’ll be the end of August before that is known – far too late to wait and see.

“Having five teams in Europe is fantastic but presents additional fixturing challenges,” says SPFL company secretary Calum Beattie. “We’ve had to build that in, trying to avoid certain matches on certain weekends, which gets quite complicated.

“We know they will play each other at some point so there’s no competition integrity issues – it just means you’ve got to bake that constraint into the recipe. But if you add more constraints, it throws up other things you don’t like…”