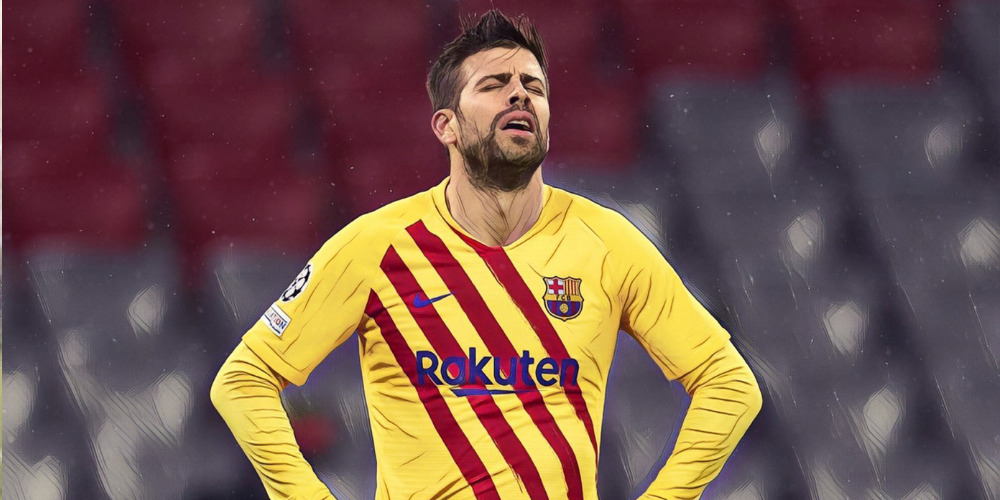 Our Champions League awards honour the best – and worst – of the midweek European action.

For the first time in over a decade, the draw for the last 16 of the Champions League will take place without Barcelona amongst its participants, the five-time winners condemned to Europa League football after a third-place finish in Group E.

The current predicament at the Camp Nou ensured their exit was far from a huge surprise, but their 3-0 defeat at Bayern Munich was the latest reminder of how far the Spaniards have fallen behind Europe’s elite.

One of the continent’s finest clubs is a shadow of its former self, their financial mismanagement having caused a rapid decline that even bright prospects such as Pedri and Ansu Fati have been unable to prevent.

This is the first time in Gavi’s lifetime that Barcelona have played Europa League football.

He was born five months after Celtic knocked them out of the 2003/04 UEFA Cup. 🤪 pic.twitter.com/MXbL4Xi8e1

That foundation of talent gives Barcelona hope and a core on which to build, but it remains to be seen if the cash-strapped Catalan club can return to former glories in the short-medium term.

The Champions League progress of Lille and Red Bull Salzburg – two teams who have earned admirers for their savvy recruitment in recent seasons – further demonstrated the lack of planning and sense in Barcelona’s recent history.

How Barcelona could do with Lionel Messi still amongst their ranks?

Messi’s summer departure has accelerated the decline of the Spanish side, with their parting of ways seeing the seven-time Ballon d’Or winner head to Paris in search of a new challenge.

The 34-year-old has enjoyed his best performances in a PSG shirt in continental competition, scoring five goals in just five appearances during the Champions League’s group stage.

There were glimpses of Messi at his majestic best against the Belgians, including a superb first goal as he collected Mbappe’s pass before cutting inside and firing home from distance.

Another incredible strike in the Champions League from Lionel Messi 😍

Messi’s brace saw him move past Pele’s record of 757 career goals, achieving the feat in 93 fewer games (950) than it took Cristiano Ronaldo (1043) to reach the figure.

PSG’s forward line is world football’s most talented on an individual basis and the Ligue 1 side will hope the encouraging chemistry demonstrated from Mbappe and Messi can reach a new level as the knockout stages begin next year.

Goal of the Week

Ralf Rangnick labelled Mason Greenwood as a ‘massive talent’ following the forward’s performance in Manchester United’s 1-1 draw with Young Boys, the 20-year-old opening the scoring with a fine acrobatic effort at Old Trafford.

Rangnick rotated his side with the Red Devils already assured of their place in the next round as group winners, though Greenwood boosted his chances of featuring regularly in the side with a strong showing at centre-forward.

Greenwood’s goal was an exhibition of the natural finishing instinct the starlet possesses, improvising instinctively to turn Luke Shaw’s hopeful cross into the first goal of the game.

Save of the Week

Kepa Arrizabalaga has endured a testing time at Chelsea ever since his record-breaking move to Stamford Bridge, the former club-record signing having found himself as the world’s most expensive second-choice goalkeeper.

The Spaniard was given a chance to impress as Thomas Tuchel rotated his options at Zenit St Petersburg, producing an excellent performance despite the west Londoners conceding three goals in Russia.

But for the heroics of the 27-year-old it could have been an emphatic defeat for the holders, with Kepa making strong saves to deny Malcolm and Sardar Azmoun.

It could have been worse, Chelsea fans…

Look at this stunning save from Kepa Arrizabalaga! ⛔️🧤#UCL pic.twitter.com/hPLPDXAkiE

The best of the evening came with a second stop from the latter, showing brilliant reflexes to palm away the Iranian’s header which the score at 2-2.

Zenit’s late, late equaliser spoiled an otherwise encouraging evening for Kepa, who will hope to build on this showing as he looks to challenge Mendy’s status as number one.

Quote of the Week

Thomas Muller pulled no punches when discussing Barcelona’s demise, after the forward scored the opener in Bayern Munich’s 3-0 win over the Spanish side.

Muller continued his excellent record against the Catalans with an eighth goal in just seven Champions League appearances against Barca, heading home the opener as the Bundesliga champions condemned their opponents to Europa League football.

The 32-year-old had been vocal ahead of the clash on the result of this year’s Ballon d’Or, with former Barcelona forward Lionel Messi named the world’s finest footballer for a seventh time despite the outstanding performances of Muller’s club teammate, Robert Lewandowski.

Muller said the clash with Barcelona provided Bayern with a chance to show the world the strength of German football, with the star taking aim at their beaten opponents following a convincing win for the Bavarians.

Muller after sending Barca to the Europa League 👀 pic.twitter.com/q7B3raLx6w

Sebastien Haller’s stunning season continued as Ajax beat Sporting Lisbon, with the Dutch champions joining an elite group of clubs to have earned group stage progression with a perfect record.

Haller’s first season at this level has been nothing short of incredible, becoming just the fourth player – after Cristiano Ronaldo, Lionel Messi and Robert Lewandowski – to score 10+ goals in a single group stage campaign.

The Ivorian opened the scoring against Sporting from the penalty spot, also becoming the first player in history to score in each of their first six appearances in the Champions League.

Sebastien Haller becomes only the second player in Champions League history to score in every group stage game, after Cristiano Ronaldo.

He knew what he was doing 🧠 pic.twitter.com/2uthNPt3Hx

The former West Ham forward has found a home at Ajax and has now scored 18 goals in just 19 appearances across all competitions this season, with the 27-year-old the spearhead of a side that will enter the knockout stages with no fear.


Stat of the Week

There have only been a limited number of Iranian footballers to have made an impact at the highest level of club football, but the nation’s finest have often proven the scourge of Chelsea.

Sardar Azmoun’s goal for Zenit St Peterburg saw him become the latest Iranian to net against the west Londoners in continental competition, with a remarkable 27% of all the Champions League goals scored by Iranian players having come against Chelsea.

Kyle Walker faces the prospect of missing Manchester City’s last-16 tie, having been dismissed during the Premier League champion’s 2-1 defeat to RB Leipzig.

The clash represented a dead-rubber with City already through as group winners and Leipzig heading to the Europa League, but ended with Walker sent off late on for a petulant kick at Andre Silva.

Having been eased under the ball by the Portugal international, Walker chased down Silva before wildly hacking at the forward from behind, earning his marching orders.

What is he thinking here!? 🤯#UCL pic.twitter.com/pXghfR8VOf

It was a needless and senseless decision from an experienced player and one that could prove costly as last season’s runners-up bid to reach a second successive final.

Pep Guardiola was far from pleased with Walker’s moment of madness, describing the incident as unnecessary.

“The red card hurts us, especially for the round of 16. Kyle Walker is an important player for us and it unnecessary to lose him like this,” he said. “I hope he learns from this.”