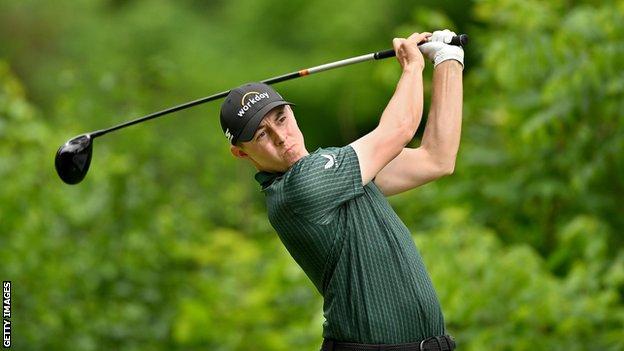 The 122nd US Open rolled into Boston this week at a venue that has been the scene of almost as much controversy as LIV Golf is creating.

Brookline Country Club in Massachusetts hosted the 1999 Ryder Cup, which would become known as the ‘Battle of Brookline’ after both European and US media lambasted “boorish” behaviour by the home players and fans.

And while the 156 players teeing it up this week are keen to focus on the immediate challenge ahead of them, they have also enjoyed a “gossip” about the future.

The questions surrounding the Greg Norman-fronted fledgling LIV series have predictably dominated the headlines in the build-up.

While some players have been keen to tackle the issue head on, others have looked uncomfortable, with a few preferring to duck the inevitable grilling.

Rory McIlroy and Justin Thomas have emerged as two of the strongest advocates for the PGA Tour, which has suspended all its members who played in last week’s LIV event near London – the European-based DP World Tour is expected to announce what it is doing with its rebels on 23 June.

Northern Ireland’s McIlroy, the 2011 US Open champion, says it is “sad” that LIV is overshadowing the event, while last month’s US PGA Championship winner Thomas has told his peers “you’ve got to do what’s best for you or what you think is best for your career, but selfishly I don’t want you to go”.

Spain’s Jon Rahm, who defends his US Open title this week, says while his “heart is with the PGA Tour” and he is also concerned about the “future of the Ryder Cup” he understands why players such as his compatriot Sergio Garcia have joined LIV.

Phil Mickelson was hesitant and awkward as he dealt with questions about a letter sent to the American LIV players by a group representing victims’ families and survivors of the 9/11 terror attacks – according to an FBI declassified document, 15 of the 19 plane hijackers in the attacks were Saudi nationals.

The letter accused Mickelson, who last year became golf’s oldest winner of a major at the age of 51, of sportswashing and betraying his country.

“I have the deepest of sympathy and empathy for them,” said the six-time major champion, who won the 2021 US PGA Championship.

Dustin Johnson, winner of this title in 2016, has not spoken to the media this week, but 2020 champion Bryson DeChambeau, who is arguably the most significant LIV signing to date, said it was “a business decision first and foremost” adding, in line with others who have switched, that it is for his “family’s future”.

Australian Cameron Smith, who won the PGA Tour’s flagship Players Championship in March, dodged questions over whether he was considering joining LIV.

The world number six said: “I’m far from the smartest person in the room, and I’m not a politician. I’m here to follow a white golf ball around and kind of see what it does.”

Meanwhile, Open champion Collin Morikawa said he is “interested to see what’s going to go on, it’s fun, it’s exciting because it is gossip. Who doesn’t like gossip, right? But it also becomes a distraction.

The United States Golf Association (USGA), which runs the US Open, said last week that LIV Golf players who had qualified were eligible to play this week.

However, when asked if he could foresee a time when it would be harder for players on the LIV Golf tour to qualify for the US Open, USGA chief executive Mike Whan replied: “Yes.”

However, when pushed to elaborate on his answer, he said: “Do I know what that day looks like? No. We need to take a long-term view, not have a knee-jerk reaction.

“We’re going to definitely re-evaluate field criteria. We would any year.

“We build a field criteria, we post it, and we let people play their way into it or out of it, and that’s how we made the decision on 2022.

“Whether we all like it or not, in February 30 guys played for the same promoter in Saudi Arabia with an acceptable release from the PGA Tour, and for years the DP World Tour has had an event there, same promoter.”

The top 60 in the world rankings, who are not otherwise exempt, qualify for the US Open and LIV Golf told BBC Sport last month that it was “confident” it would be allowed to award ranking points for future events – although at present it does not.

The Official World Golf Ranking (OWGR) board which will make the decision comprises Augusta National, the DP World Tour, the PGA Tour, the R&A, the PGA of America, the USGA, and the International Federation of PGA Tours.

Plenty of attention will remain on Mickelson when he tees off in Brookline and not just because it will be his 52nd birthday on Thursday.

He is playing in his 30th US Open and will be once again hoping to complete the Grand Slam – winning all four majors – after being a record six-time runner-up in the event.

His LIV outing at the Centurion Club was his first competition since February after he took a four-month break because of “reckless” comments about the Saudi regime, for which he has since apologised. He finished the 54-hole LIV event on 10 over par.

The year 2013 was a significant one for England’s Matt Fitzpatrick, who heads into the week in fine form, having finished fifth at last month’s US PGA Championship and in the top 10 at last week’s Canadian Open.

The 27-year-old from Sheffield has history at Brookline, having won the US Amateur there in 2013.

McIlroy will once again look to end his eight-year major drought. He held off the challenge of Thomas to defend his title in Canada last Sunday and climb to three in the world rankings.

But, as with all majors, the winner could come from anywhere. Thomas has plenty of momentum too, while Jordan Spieth is rediscovering the form that saw him win this title in 2015 and may have the creativity to go well this week.

And can you ignore American Will Zalatoris? He’s playing just his eighth major but has two runners-up and three other top-10s in the game’s biggest tournaments.

Of the players above McIlroy, world number one Scottie Scheffler had a blistering start to 2022, winning four titles, including the Masters, and while he missed the cut at the PGA Championship, he went close at the end of May, losing in a play-off at the Charles Schwab Challenge.

Rahm has not challenged at the two previous majors this year but a win in Mexico at the start of May proves the world number two can never be discounted.

Fifteen-time major champion Tiger Woods has opted not to play as he continues a return to full fitness with an eye on July’s 150th Open Championship at St Andrews.

Where is the US Open being played?

The Country Club at Brookline was one of the five clubs that founded the USGA in 1894 and it will host the US Open for the fourth time having last welcomed the competition in 1988.

The first was in 1913 and won by 20-year-old US amateur Francis Ouimet after a play-off against British favourites Harry Vardon and Ted Ray.

The tournament had been delayed to allow reigning Open champion Ray, and Vardon, who won the US Open in 1900 and would go on to claim a record six Opens, to play.

Ouimet’s victory is generally regarded as kick-starting golf in the US, with tournaments before then generally dominated by British players.

The venue is also noticeable as the host of the Ryder Cup’s ‘Battle of Brookline’ in 1999 when American players, their caddies and wives, rampaged on to the 17th green after Justin Leonard holed a 45-foot birdie putt to prematurely celebrate victory.

Europe had won the previous two events 14½-13½ and looked destined to win a third, taking a 10-6 lead into Sunday’s singles.

But the Americans won the first six matches to take control and the behaviour of the fans spiralled almost out of control with European players being heckled and abused all day.

Even the late Payne Stewart had to intervene and ask the marshals to do their job and stop the abuse of Colin Montgomerie in their match.

It came to a head on the 17th hole. Leonard was all square with Jose Maria Olazabal, with the US needing half a point to regain the Ryder Cup. The celebrations that followed Leonard’s 45-foot putt were widely pilloried as unsportsmanlike, given Olazabal still had a 22-foot putt to halve the hole.

Once the bedlam subsided, the Spaniard missed to give the US team a 1UP lead with one hole to play, guaranteeing them the half point they needed to regain the trophy 14½-13½.

In his autobiography, European vice-captain Sam Torrance called it “the most disgraceful and disgusting day in the history of professional golf”.

“I’ve got nothing against a big par three, but they don’t have to be 230-yard brutes to require execution at the highest level,” said the USGA’s Jeff Hall of the 131-yard 11th.

The greens are, on average, the second smallest in championship golf behind Pebble Beach.

When The Country Club was first founded, horse racing was one of its most popular sports and the fairways of the first and 18th holes once sat inside a racetrack.

Being first built in the 19th century means The Country Club course had to work with the landscape rather than against it.

As a result, rocky mounds pile up either side of the third hole where at one point the fairway is nine yards wide and players will have to decide whether to go between or over the hills.

The 10th hole is nicknamed ‘Himalayas; with a large rock on the right which will require a 300-yard carry before a steep green surrounded by bunkers and rough.