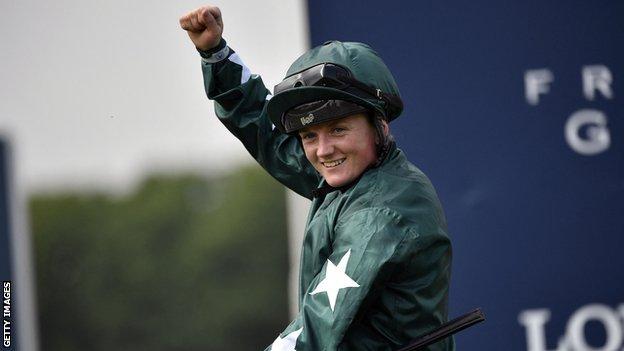 England’s Hollie Doyle became the first female jockey to win a French Classic race with victory on Nashwa in the French Oaks at Chantilly on Sunday.

Doyle, 25, had become the first woman to be placed in a British Classic when she came third on the filly in the Oaks at Epsom earlier in the month.

Favourite Nashwa won from La Parisienne with Rosacea third in the race which is officially known as the Prix de Diane.

“I am just privileged to be in this position,” she said.

After crossing the winning line, Doyle was congratulated by husband and fellow jockey Tom Marquand, who was seventh on Zellie in the race, which was first run in 1843.

She was third in the BBC Sports Personality of the Year award in 2020 after riding a Champions Day double at Ascot and partnering five winners at one Windsor meeting.

Last year, she broke her own record for the most winners in a calendar year for a British female jockey.

On Tuesday, Doyle recorded her third Royal Ascot success with victory on Bradsell in the Coventry Stakes.