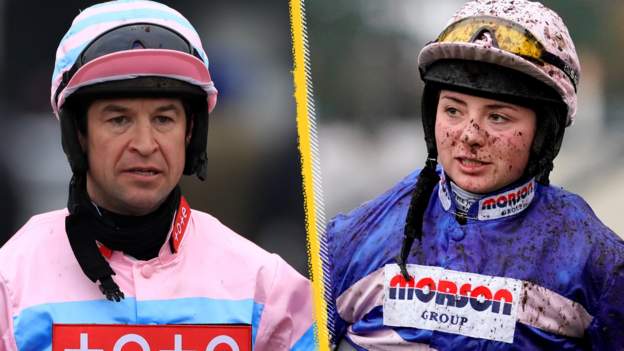 An independent panel found Dunne in breach of all four counts of conduct prejudicial to the reputation of horse racing.

Three charges of violent or improper conduct are yet to be considered.

The panel heard evidence over several days about a “weighing-room culture” following charges brought by the British Horseracing Authority (BHA).

Brian Barker QC, the panel’s chair, said that “deliberate conduct over a course of a significant period of time has been revealed”.

Barker added that Dunne was guilty of “distasteful targeting, deliberate harassment on and off track, and occasional cases of dangerous bullying”.

He said the panel had “real concern” about the weighing-room culture, which he said was “deep-rooted and coercive”.

The majority of the incidents in question took place in 2020, when Dunne was found by the panel to have threatened Frost by promising to “put her through a wing [of a fence]” and he was also accused of using misogynistic language towards her.

“We find that the words used on 3 September were, as a promise, to cause real harm – over and above the usual jockey mantra of ‘murdering’,” said Barker.

“On the examination of Ms Frost’s evidence and demeanour we find her to be truthful, thoughtful and compelling.

“By taking her complaint to the authority she has broken the code [of the weighing room], knowing that her isolation – and rejection by some – was inevitable.

“In acknowledging after the Southwell race Mr Dunne believed that Ms Frost was the cause of his mount’s death and that he had suffered a fall, we are unable to accept Mr Dunne’s sweep of denials, criticisms and his reasons.”

What evidence has been heard in this case?

Louis Weston, representing the BHA, said in his closing remarks that Dunne subjected Frost to a “vendetta”.

The treatment of Frost, 26, by some colleagues since she made the complaint has been “outrageous”, Weston said, and that Frost had been ostracised by some other jockeys and valets.

Weston has previously said Dunne, 36, threatened to cause Frost serious physical harm and also used “foul, sexually abusive and misogynistic language” towards her.

While giving evidence, Frost said Dunne had “opened his towel and shook himself” in front of her in the men’s changing room, where female jockeys would sometimes go to collect kit.

Dunne said being naked was not a sexual act and could only recall being undressed in front of her when walking from the sauna to the weighing scales.

Roderick Moore, for Dunne, said in his closing remarks to the hearing that the BHA case was a “jigsaw puzzle with numerous missing pieces”.

He said that Frost had experienced “issues” with three other senior jockeys and that a leak to the Sunday Times of the investigation report had “a massive effect on Mr Dunne’s health and welfare”.

Dunne had denied four charges of conduct prejudicial to horse racing, including bullying and harassing Frost, and two of the three counts of violent or improper behaviour.

Dunne has said he was using a “figure of speech” and not a “threat” when he told Frost he would put her through the side of a fence.

Weston questioned why other riders had not seen anything out of the ordinary from the exchange.

“If there is a weighing-room culture that allows one jockey to threaten another with serious harm to them and their horse, that culture is one that is sour, rancid and we say should be thrown out and discarded. It’s had its time,” he said.

He said racing “exerted a pressure on people who would otherwise speak freely”.

The panel is set to hear submissions on penalties by the BHA and Dunne’s legal team.