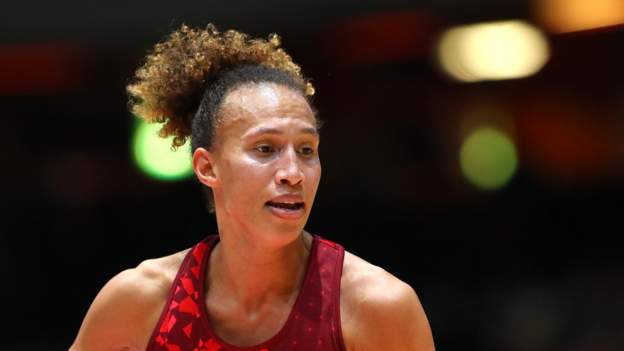 England came from behind to beat New Zealand 49-46 and earn their second successive win of the Quad Series.

The Roses struggled to break down a tenacious Silver Ferns mid-court in the first quarter but the injection of Jade Clarke and Eboni Usoro-Brown proved to be significant.

Head coach Jess Thirlby said: “We had to win in a way we didn’t plan to.”

England and Australia, who have both won their first two games, will face off on Tuesday – a game that will be available to watch on BBC4 – while New Zealand take on South Africa.

“We had to keep the ball incredibly well and that’s a good thing for us to practise,” Thirlby added after England’s win.

Ferns captain Gina Crampton, earning her 50th cap, showed a marked improvement on Saturday’s performance against Australia and fed the shooters with freedom while England struggled to hold on to the ball and find an opening.

After falling to a seven-goal deficit, Thirlby shuffled the pack and EUsoro-Brown, who returned for the Roses’ series against Jamaica after having a baby, replaced Geva Mentor at goal keeper in the second quarter to steady the ship and and made some vital intercepts.

The injection of England’s most capped player Clarke at centre and Serena Guthrie’s move to wing defence sparked a huge shift in momentum for the Roses as a partisan crowd roared them on to draw level at half-time.

“Serena has always had that ability to hunt for the ball that we really need,” Thirlby said. “But we are a whole team and we can’t rely on just Serena. Jade’s [Clarke] ball retention in attack when things felt a bit shaky was key so I’m really impressed – why wouldn’t I be with Jade?”

A tight third quarter went goal for goal until a crucial interception from Guthrie, who was outstanding at wing defence, gave impressive shooter George Fisher the chance to extend the Roses’ lead to three goals just seconds before the end of the period.

The comeback was not dissimilar to the one against the Ferns in Christchurch – where the Roses rallied to seal victory after going behind by 10 goals – and leaves New Zealand without a win in this series.

Thirlby’s ability to bring on such quality from her bench and have players, like Guthrie, who are equally strong in two positions puts the Roses at a notable advantage with Commonwealth Games selection looming.

Australia two from two with win over South Africa

Australia took their second win of the series over a dogged South Africa who showed significant signs of improvement with a more assured performance than in Saturday’s thrashing by the Roses.

Just four goals separated the two sides at half-time and a commanding mid-court performance from Bongi Msomi and solidity in defence with Phumza Maweni were encouraging signs for South Africa head coach Dorette Badenhorst, despite this being the second loss of their campaign.

The Diamonds, who had left two of their most experienced heads in Jo Weston and captain Liz Watson out of the match-day squad, struggled to settle in the first half but a crushing 18-goal third quarter was enough to take the wind out of the Proteas and secure a 20-goal win.