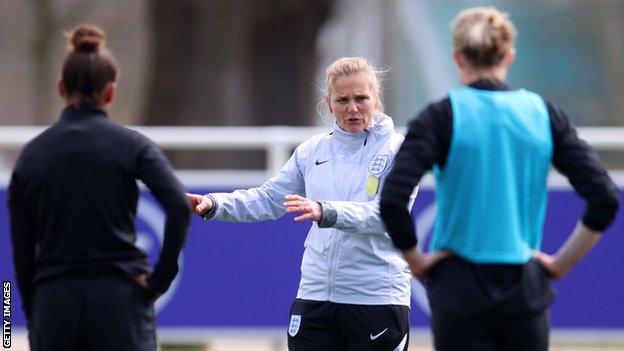 England manager Sarina Wiegman hopes to use their upcoming friendlies to perfect their style of play and find a preferred starting XI for the Euros.

The Lionesses kick-off the tournament, which is being held in England, at Old Trafford against Austria on 6 July.

They have been training at St George’s Park this month and play Belgium on Thursday in the first of three friendly matches, in preparation for the Euros.

“We still want to do some things in our style of play,” said Wiegman.

“We have different opponents in front of us. Chloe Kelly, for example, has been in the squad for the first time so it is really nice to see what she can bring to the team.

“I don’t want to share all of it but we will take it step by step.”

Wiegman said she was “getting a little closer” to knowing her best XI when asked if strong individual performances against Belgium, the Netherlands and Switzerland could influence it.

“This team is really competitive so we have some hard choices to make. That is another reason as to why we play these three games,” she added.

“Players need to keep performing. When you play a really good game now you have opportunities. It’s about knowing where the players are and looking at how we can make other scenarios work.”

Players expected to ‘manage own emotions’

Thursday’s game against Belgium at Molineux comes just 24 hours after Wiegman named her final 23-player squad for the Euros.

Wiegman hopes the players will “manage their own emotions” against Belgium following the news and admitted it will bring “relaxation”.

“It’s good to have clarity and go to the next stage [of our preparations],” said Wiegman.

“It brings relaxation, but not for the game. We were also preparing for Belgium during this time. We can focus on football, we have a gameplan and the players have tasks, so they can just try to execute those as good as possible.

“That is the focus and hopefully their thoughts are on that.”

Wiegman has a near-full squad to select from for Thursday’s friendly, though Chelsea defender Jess Carter is a doubt and will face a late fitness test.