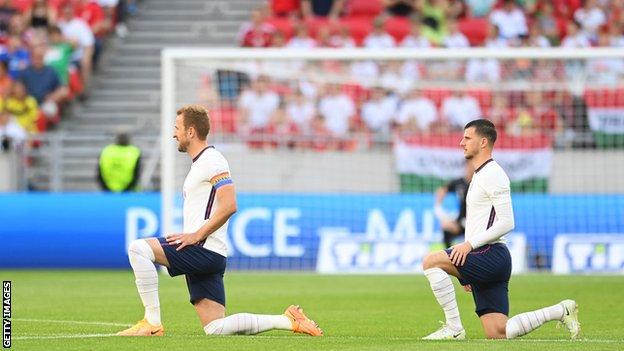 England players were jeered when they took a knee before their Nations League match in Hungary, despite most of the crowd in Budapest being children.

Last June, Hungary were ordered by Uefa to play three games behind closed doors as punishment for discriminatory behaviour by their fans at Euro 2020.

But Saturday’s fixture saw over 30,000 spectators at Budapest’s Puskas Arena.

The Hungarian FA used a Uefa regulation that allows children up to 14 to attend for free if accompanied by an adult.

Channel 4, which is broadcasting the match in the UK, asked Uefa for a statement on the matter but were told by European football’s governing body that it would not be making any comment.

Hungary have also been ordered to play two games behind closed doors by world governing body Fifa because of racist abuse directed at England players during the World Cup qualifier in Budapest on 2 September.

Raheem Sterling and Jude Bellingham were both subject to the abuse, with a flare and other objects thrown on to the pitch by the home fans at the same venue.

‘There was no escaping the jeering’

The booing could clearly be heard around the vast arena moments before kick-off.

The noisy crowd was respectful to both national anthems so it was even more of a sharp contrast that England’s public gesture opposing racism and discrimination was met with obvious hostility from such a young gallery.

England’s players rose quickly from taking the knee but there was no escaping the jeering, which was laced with heavy irony as the whole point of Hungary’s punishment – playing behind closed doors – was to act as a deterrent to further racist and homophobic behaviour by fans.

It will also pose questions of how Uefa’s rules can be massaged so easily that a game that was meant to be played without a crowd can end up in this situation.