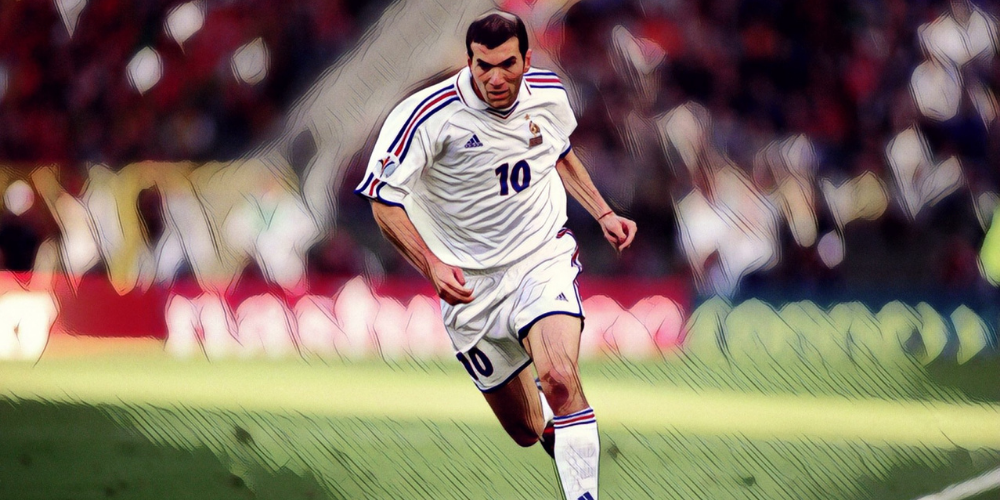 Zinedine Zidane was more than just a fantastic footballing talent, he was a player whose most memorable moments defined an era and for many remains the greatest of his generation.

Zidane’s career is one of storied success and no shortage of genuine magic, be it his inspiring of France to World Cup success on home soil in 1998, or that swing of his left boot to secure the Champions League for Real Madrid four years later.

Even his final contribution on a pitch, an ill-advised thrust of his head into the chest of Marco Materazzi as the red mist descended in the 2006 World Cup final, adds to the grand allure of Zidane’s magnificence and mystique.

That trio of telling career moments often dominate when discussing Zidane’s story, but for some it is the midfielder’s performances at the 2000 European Championship that live longest in the memory.

Zidane was immortalised for his contribution to Les Bleus’ coronation as world champions two years earlier, but his displays in the Netherlands and Belgium that summer were arguably the finest of his time as the face of France’s Golden Generation.

Expectations were understandably high as Roger Lemerre’s side arrived into the European Championship as champions of the world, though the French were handed a difficult assignment in a group containing Denmark, a Czech Republic side that had finished as runners-up in 1996, and talented co-hosts the Netherlands.

France faced the Danes – surprise winners of the 1992 tournament – in their opening fixture and initially struggled to get a foothold in the game, the underdogs threatening early on as Jon Dahl Tomasson was denied by Fabien Barthez.

Lemerre had kept faith with the majority of players who had helped France to World Cup success, though there were fresh faces in the squad in the form of the emerging Nicolas Anelka and Sylvain Wiltord.

He fluctuated between a 4-2-3-1 and 4-3-1-2 formation, Zidane floating in a free role as the quintessential number 10 in both systems.

Zidane showcased he was the player to stop early on in the contest, picking the ball up inside his own half before gliding elegantly forward, manoeuvring his way through a succession of Danish challenges with a one-two and that familiar balletic balance.

Zidane was central to France’s best attacks, picking out Anelka with a clever reverse pass, only to see the youngster spurn a good opportunity into the side netting.

Minutes later and the world champions were up and running as Laurent Blanc’s forward run resulting in the defender opening the scoring, following in on the rebound after Anelka had been thwarted by Peter Schmeichel.

Thierry Henry doubled the advantage just after the hour with a goal that would become familiar to Premier League fans for seasons to come, racing down the left before opening his body to place the ball into the far corner.

Sylvain Wiltord added a third after coming off the bench and France had bounced back from a slow start to make a winning start to their campaign in Bruges.

The second game saw Les Bleus take an early lead as Henry capitalised on a defensive mistake to open the scoring, though France were pegged back as Karel Poborsky netted from the penalty spot.

Zidane may not have played a tangible role in Youri Djorkaeff’s winner that secured qualification, but then the midfielder’s game should never be judged on numbers.

He drifted effortlessly between opposition lines, waltzing past challenges with side-steps, feints and pivots, tormenting some of the continent’s finest in the process.

Zidane was rested as a rotated side lost a thriller 3-2 to the Netherlands in their final group fixture, a clash which many predicted would be a prelude to the final.

Already assured of their place in the knockout stages, France faced Spain in the last eight as Zidane began to take hold and shape the latter stages of the tournament.

He opened the scoring against the Spanish in stunning style, an expectant home crowd waiting with bated breath as Zidane stood over a free-kick, arcing a wondrous effort over the wall and into the top corner.

It was Zidane’s first goal at the finals and a moment of pure inspiration from the French number 10.

The lead lasted only a matter of minutes as Gaizka Mendieta’s penalty restored parity, though France progressed courtesy of Djorkaeff’s goal, in a fixture which saw Raul miss a late chance from the penalty spot to force extra-time.

Spain were left chasing shadows as Zidane conducted the French charges, his first touch immaculate and speed of thought appearing to belong to a man another stage on in the process of footballing evolution.

Balance, poise and an ability to manipulate the ball in any such way he chose, this was peak Zidane exerting his status as the game’s greatest in a tournament in which creativity flourished.

Throwback to when Zinedine Zidane tore Spain apart at EURO 2000 🔥

Portugal and their own fabled ‘Golden Generation’ awaited in the last four, a fixture billed as a clash between Zidane and Luis Figo, his future Real Madrid teammate and a player who would be crowned as winner of the Ballon d’Or later that summer.

The Portuguese had impressed on their way to the semi-finals in beating Germany and England in the group stage, before a 2-0 win over Turkey in the last eight booked a showdown with the world champions in Brussels.

Nuno Gomes – whose double had seen off the Turks in the previous round – opened the scoring against the run of play with a brilliant finish from outside the penalty area, lashing the ball beyond Barthez.

Portugal grew in confidence with Figo shining, only for Zidane to delve into his box of tricks to turn the tide.

There was one clever back-heel into the path of Bixente Lizarazu and a marauding run past a succession of Portuguese challenges, Zidane effortlessly toying with the opposition as he manipulated space and seemingly slowed down time.


Henry’s low effort had brought the world champions level early into the second half, but this was a fixture which belonged to the awe-inspiring Zidane.

One sublime touch encapsulated the best of Zidane at the finals and his mesmeric balance, Emmanuel Petit’s hopeful long pass in the direction of his compatriot brought under control in jaw-dropping fashion.

The diagonal pass was somewhat wayward as it headed towards Zidane at chest height, the midfielder cushioning the ball upwards before spinning 180 degrees, shifting the dropping ball away from the defender with his right boot before delivering a tantalising cross in the direction of Nicolas Anelka.

Give Zidane possession and he would make things happen, of that there was no doubt.

Unable to be separated within 90 minutes, the game headed to extra-time where an Abel Xavier handball presented Zidane with the opportunity to book Les Blues’ place in the final from the penalty spot.

He was forced to wait three minutes to take the kick given the desperate Portuguese protests, before emphatically dispatching the spot-kick to book a final showdown with Italy.

Zidane was back in a major tournament final, though this one seemed to be heading towards heartbreak as Marco Delvecchio opened the scoring for the Azzurri who led with just seconds remaining.

France’s leading light shouldered responsibility for his side as they struggled to get back into the game, but the close attentions of the Italians looked to have resulted in frustrating the French.

As the full-time whistle edged ever closer, it was Sylvain Wiltord who broke the Italian resistance, his 93rd-minute leveller forcing extra-time and raising the roof at De Kuip.

The Golden Goal ruling would end a thrilling tournament in the most dramatic of fashion, David Trezeguet rifling home an emphatic left-footed finish to spark jubilant celebrations amongst the French who added a European crown to their world triumph of two years earlier.

Victory secured Les Bleus’ place as the defining international team of a generation and Zidane was the figurehead of the side, a footballer who stood head and shoulders above his peers during an era of unprecedented French success.

Almost two decades after Michel Platini had inspired France to European Championship success, Zidane was named as Player of the Tournament in a triumph which many felt saw him surpass his illustrious compatriot as the finest French footballer of all time.

Comparing generations can be a thankless task, but as the new millennia was ushered in there was little disputing Zidane’s position at the apex of footballing genius.