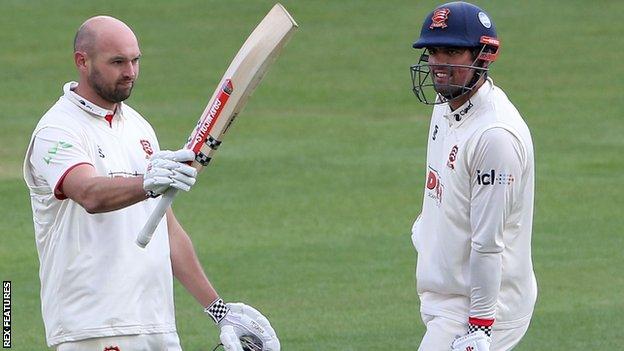 Centuries from openers Alastair Cook and Nick Browne gave Essex a strong start to their County Championship campaign against Kent.

Earlier Cook (100) and Browne (107) batted together for more than two sessions before reaching their tons.

Both fell in the evening session along with Dan Lawrence (7) and nightwatchman Jamie Porter as Essex closed on 272-4.

Jackson Bird (2-49) claimed the wickets of both centurions as first Browne was bowled misjudging an off-drive and then Cook gave a thin outside edge through to stand-in Kent captain Ollie Robinson behind the stumps.

But despite Kent being rewarded for their persistence with the ball late on, the day was dominated by former England captain Cook and right-hander Browne.

Both went relatively untroubled on their way to three figures and Browne was first to the landmark.

His 17th first-class century was brought up with his 13th four. But shortly after he fell to Bird, Cook followed suit.

Cook’s 70th first-class century and 37th in an Essex shirt was a characteristic effort off 266 balls and included 11 fours as he reached 100 with a trademark leg glance for a single off Matt Milnes.

However, he also was dismissed in the final half hour of play with England Test batter Lawrence also departing soon after. Former Essex seamer Matt Quinn trapped him leg before as he offered no shot to a ball that nipped back from outside off stump.

Porter was also leg before first ball to Nathan Gilchrist but Essex captain Tom Westley will resume on 28 not out with debutant Matt Critchley (4 not out) alongside him at the crease.