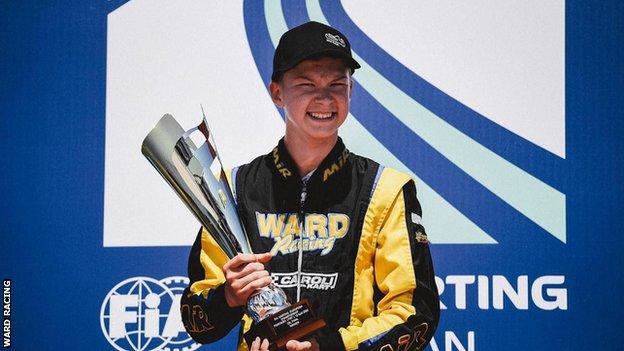 The FIA – motorsport’s governing body – is investigating after a 15-year-old Russian karting champion appeared to make a Nazi salute on a podium.

Artem Severiukhin seemed to perform the offensive gesture after winning the first round of the European Championship in Portugal on Sunday.

He was competing under the Italian flag because of the sanctions put on Russian athletes following their country’s invasion of Ukraine.

His team has terminated his contract.

“The actions of Artem Severiukhin during the award ceremony on April 10, 2022 were exclusively individual and do not represent the views and values of Ward Racing in any manner.

“On the contrary, Ward Racing stands with the international community condemning Russia’s invasion of Ukraine and expresses its solidarity with the people suffering because of this unprovoked and horrific attack.”

It added: “Ward Racing sees no possibility for continued cooperation with Artem Severiukhin and will proceed with terminating his racing contract.”

The FIA announced it had launched an immediate investigation into Severiukhin’s “unacceptable conduct” on Monday.