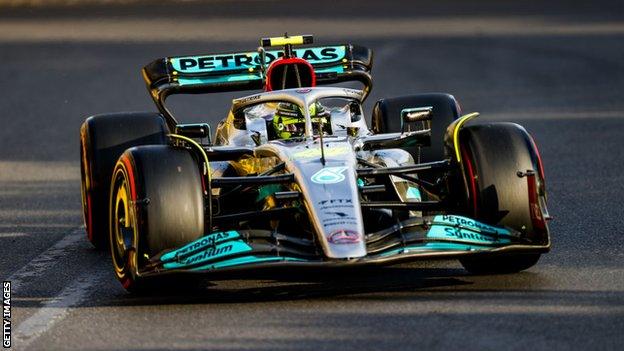 Formula 1’s governing body the FIA says it is taking steps on safety grounds to reduce the high-speed bouncing that has affected drivers this season.

The FIA has now issued a technical directive to teams setting out how it plans to tackle ‘porpoising’.

The ninth round of the 2022 season takes place in Canada this weekend.

In a statement, the governing body said it decided to intervene following “consultation with its doctors in the interests of safety of the drivers”.

It added: “In a sport where the competitors are routinely driving at speeds in excess of 300km/h, it is considered that all of a driver’s concentration needs to be focused on that task and that excessive fatigue or pain experienced by a driver could have significant consequences should it result in a loss of concentration.

“In addition, the FIA has concerns in relation to the immediate physical impact on the health of the drivers, a number of whom have reported back pain following recent events.”

‘Porpoising’ is caused by the floor of the car being sucked so close to the ground at speed that downforce is temporarily lost until the car’s ride height increases, before pulling it back down again.

It is a phenomenon that has returned to F1 for the first time in 40 years this season as a result of the new car designs introduced to make the racing closer.

Initially, the FIA’s measures will focus on scrutiny of the planks and skids underneath the car “both in terms of their design and the observed wear” and efforts to calculate an “acceptable level of vertical oscillations” – in other words, how much the car is allowed to bounce.

It will then hold a technical meeting with teams in order to review the data and form a plan to reduce the problem in the long term.

What have the drivers said?

After climbing slowly from his car and rubbing his back at the end of last weekend’s race in Baku, Hamilton wrote on Instagram that the aggressive bouncing feels “100 times worse” than it looks but he was “motivated to keep pushing” and already feeling better.

That came after Hamilton’s team-mate George Russell said in the build-up to the race in Azerbaijan that safety was becoming a concern over the bouncing of the cars.

Ferrari’s Carlos Sainz has previously questioned the long-term health impacts of the bouncing, adding: “How much toll should a driver pay for his back and his health in an F1 career with this kind of car philosophy?”

And in interview with BBC Sport earlier this week, Alfa Romeo driver Valtteri Bottas warned that ‘porpoising’ is “getting quite serious” and believes it could cause injuries to drivers.

He added: “[I’m] not sure how sustainable that is in the future and we start to actually see injuries of drivers just by driving the cars – that’s not how it should be.”

Meanwhile, McLaren’s Daniel Ricciardo said the bouncing many drivers were experiencing was “not normal or comfortable”.

“The position we sit in the car, we don’t have much room to move so we are not prepared for the impacts,” the Australian added. “If that is up to a rule change, or the way the teams are setting up the cars, I am not 100% sure. But I wouldn’t like anyone to go through any unnecessary injury or pain.”

However, Ricciardo’s team-mate Lando Norris has previously suggested that teams suffering from the worst of the bouncing – such as Mercedes – have a range of options to reduce the issue, among them “lifting your rear ride height 20mm”.

That is a view echoed by Red Bull team boss Christian Horner, who says “the easiest thing is to raise the car” but the teams most affected are reluctant to do so because of the effect it would have on performance.

“Each team has a choice,” Horner added. “If it were a genuine safety concern across the grid, it should be looked at, but if it’s only affecting isolated teams then that’s something that team should potentially deal with.”