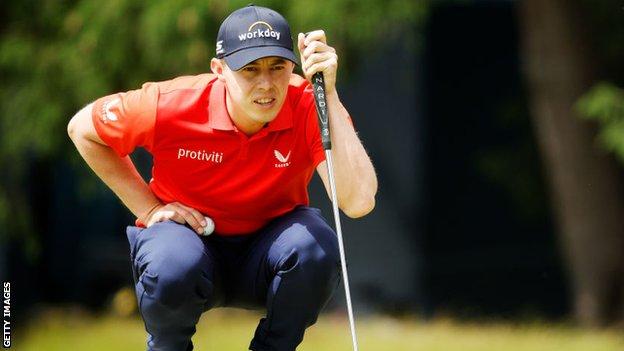 England’s Matt Fitzpatrick takes a share of the lead into the final round of the US Open as he chases his first major title at Brookline Country Club.

Fitzpatrick shot a two-under 68 to move to four under, level with American Will Zalatoris, who carded a 67.

Defending champion Jon Rahm is a shot behind after he double bogeyed the 18th, with world number one Scottie Scheffler on two under after a wild 71.

Rory McIlroy battled to a 73 to sit just three shots behind on one under.

Saturday is called ‘moving day’ in the majors but most of the movement was in the wrong direction as Brookline, the USGA and mother nature combined to serve up a brutal test that even the best in the world struggled to deal with.

Only seven players finished under par for the round on a day as much about temperament as talent with bogeys unavoidable. It was all too much for overnight leader Collin Morikawa. The reigning Open champion signed for a ruinous seven-over round of 77 to fall out of contention at two over.

Zalatoris and Fitzpatrick both came close at the US PGA Championship last month, with Fitzpatrick also playing in the final group at Southern Hills, while Zalatoris lost in a play-off to Justin Thomas.

They both now have another chance to win their first major, but behind them they have the defending champion, the Masters champion and a four-time major winner desperate for more.

Sheffield-born Fitzpatrick won the 2013 US Amateur title at Brookline and he will be hoping the perfect storm of arriving at a familiar course, with his game in good shape and on the back of going close in the last major can tip the balance in his favour.

The 27-year-old certainly handled the course better than most on Saturday, with only a closing bogey on 18 preventing him from taking a solo lead.

World number 14 Zalatoris is yet to win on the PGA Tour but in his short career the 25-year-old has finished runner-up in two majors – including that US PGA Championship play-off loss last month.

What was more impressive than the four birdies on his card was the fact Zalatoris only made one bogey as he avoided the mistakes that ruined the rounds of so many others.

Playing slightly ahead of the faltering leaders, Zalatoris was in the lead when he stood on the 18th tee and duly carved a drive miles right of the fairway, but rescued a par by getting up-and-down from a bunker to show the mental toughness that defined his round.