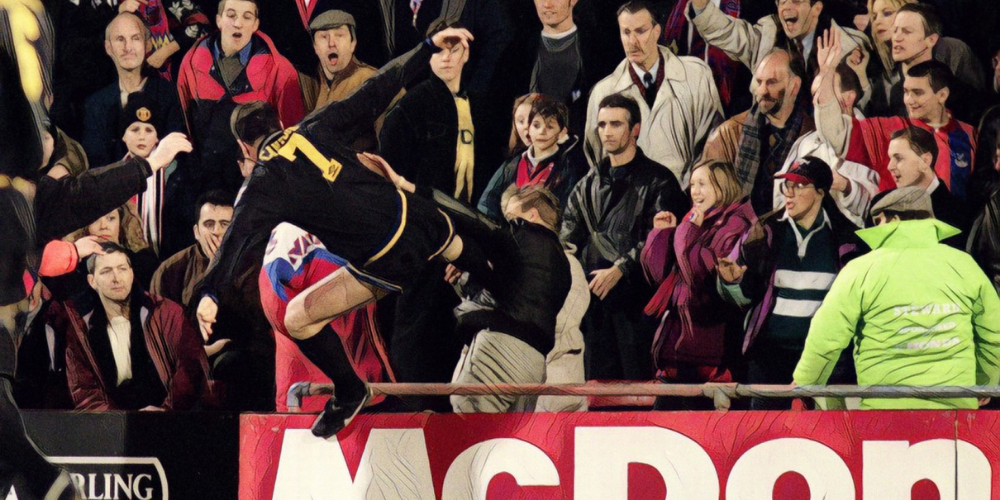 Throughout its long history there has been no shortage of controversial moments in the Premier League, from fights to bites and everything in between.

Today marks the anniversary of one of the Premier League’s biggest controversies, an incident which saw the red mist descend on Eric Cantona during a clash between Manchester United and Crystal Palace.

Cantona’s altercation with a goading Palace fan is one of the most unforgettable scenes in Premier League history and we’ve decided to look back at some other stand-out sporting storms.

Here are five of the most controversial moments in Premier League history.

We’ll start with the man himself and a moment not seen before or since in the Premier League, as Eric Cantona channelled his inner Bruce Lee in truly shocking scenes at Crystal Palace.

Cantona had found himself on the receiving end of some rough treatment from the home side, with Richard Shaw and Chris Coleman having targeted the Red Devils’ talisman with some rather uncompromising challenges.

Four minutes into the second half and Cantona – frustrated with a lack of protection from the referee – was sent off for a kick out at Shaw.

As he headed towards the tunnel, however, he was greeted with a barrage of abuse from the home crowd and took particular issues with one fan, Matthew Simmons.

Launching himself over the advertising hoardings and at Simmons, Cantona unleashed a combination of flailing limbs at Simmons as he erupted in spectacular style at Selhurst Park.

He was hit with an unprecedented eight-month ban from football and ordered to do 120 hours of community service. Even given his status as arguably the Premier League’s most influential footballer of all time, it is this that is perhaps the defining image from his colourful career in English football.

Premier League footballers often take exception with refereeing decisions, with the scene of several stars crowding round officials having been common in past seasons.

Few, however, have crossed the line quite like Paulo Di Canio.

Di Canio often played on the edge, a forward capable of both goalscoring genius and allowing his temper to get the better of him, with his ill-advised shove on referee Paul Alcock an unforgettable example.

Having become embroiled in a clash with Martin Keown as tensions boiled over in a clash between Sheffield Wednesday and Arsenal at Hillsborough, Di Canio was sent off for his role in the fracas.

The flash of red from Alcock acted almost like a scarlet rag to a bull, with Di Canio shoving the official who – somewhat quite comically we must admit – staggered backwards like Bambi on ice before crashing to the turf.

Di Canio was later banned for 11 matches and fined £10,000, whilst he never played for the Owls again. West Ham gambled on his signing in January 1999, with the forward becoming a huge fans’ favourite across four seasons in East London.

Tempers can flare up between footballers, with the proverbial handbangs a familiar sight on Premier League pitches.

Less common, however, is the sight of two teammates going toe-to-toe in the midst of a game, but former Newcastle midfielders Kieron Dyer and Lee Bowyer decided to trade punches in the middle of a clash with Aston Villa at St James’ Park.

Graeme Souness’ side were losing 3-0 on a disappointing afternoon in the North East, when frustrations boiled over for their midfield colleagues.

Bowyer – unhappy with Dyer’s perceived reluctance to pass him the ball – let his teammate know his feelings in no uncertain terms, with a response from the latter taking aim at Bowyer’s abilities.

A melee promptly followed with the two teammates dragged apart by a combination of players from both sides, having swung away in stunning scenes at St James’

The scrapping stars were subsequently sent off, leaving Newcastle down to eight men for the remainder of the contest after Steven Taylor’s earlier red card for a goal-line handball.

Luis Suarez has regularly shocked football fans during his career, whether it be for genius or controversy he has rarely been far from the headlines.

Suarez has found himself at the centre of three biting controversies during his career, with the second of those coming in the colours of Liverpool as the forward chose to chomp on the arm of Chelsea’s Branislav Ivanovic.

With the Reds trailing at Anfield, Suarez tangled with Ivanovic before laying his considerably-sized teeth into the Serbian’s arm, though the incident was missed by referee Kevin Friend.

In somewhat predictable fashion, Suarez netted a late equaliser in the clash but he was later banned by the FA following a review of the incident.

He was handed a 10-game suspension from the authorities, curtailing his campaign and ruling the Uruguayan out of the Liverpool’s first fixtures of the following season.

Alan Pardew has polarised opinion among football fans, from his premature – and entirely cringeworthy – dance moves in the 2016 FA Cup final to this half-hearted headbutt on David Meyler.

Pardew was manager of Newcastle at the time of his confrontation with Meyler, with the Magpies’ 3-1 up and in control of a contest with Hull at the KC Stadium.

Having impeded Meyler from retrieving the ball quickly on the sideline, Pardew then took objection to the midfielder’s push and squared up to the Republic of Ireland international.

“If he’d have dropped me I’d have never lived it down!” 🤣

“The police rang asking if I wanted to press charges. I thought it was a wind up!”@DavidMeyler lifts the lid on the fallout of THAT incident with Alan Pardew… pic.twitter.com/LFFnjFAsRK

His decision to push his head into Meyler led to his sending off, before being hit with a seven-game ban and a £60,000 fine.

Meyler was not overly flustered with an incident that caused wider controversy, though later joked to BT Sport he was glad to have remained on his feet.

“I just said something to him, a token gesture, and then he used some explicit language. I referred to him being a ‘soft, southern something’.” Meyler said.