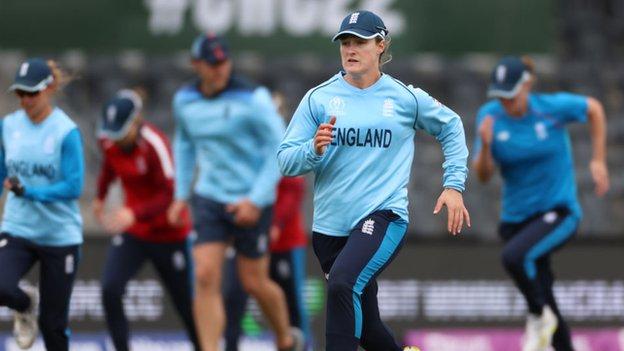 Opener Emma Lamb is one of five uncapped players named in the England squad for the women’s Test against South Africa at Taunton next week.

Lamb, who was part of the squad that reached the World Cup final, will join Tammy Beaumont at the top of the order.

All-rounder Alice Davidson-Richards is also included in the 13-strong party.

The four-day Test, beginning on Monday, forms part of a multi-format series, with three one-day internationals and three Twenty20s to follow.

It will be the first time since 2008 that England have played a Test without both Brunt and Shrubsole.

Brunt announced on Saturday that she has retired from Test cricket but will continue to play limited-overs internationals, while Shrubsole ended her international career after the World Cup.

Neither Bell, 21, nor 24-year-old Arlott have played any international cricket, but Davies, 26, has won 24 caps across the white-ball formats.

Like Davies, 24-year-old Lamb played in one match of England’s World Cup campaign and also comes with the option of some part-time off-spin.

Davidson-Richards, 28, has not played for England since 2018, when she featured in one ODI and five T20s.

Eight of England’s XI from their last Test – the drawn Ashes match in Australia – are retained.

Opener Lauren Winfield-Hill, who was dropped during the World Cup, misses out. She is part of an England A squad to take on the tourists in a three-day match at Arundel from Tuesday.