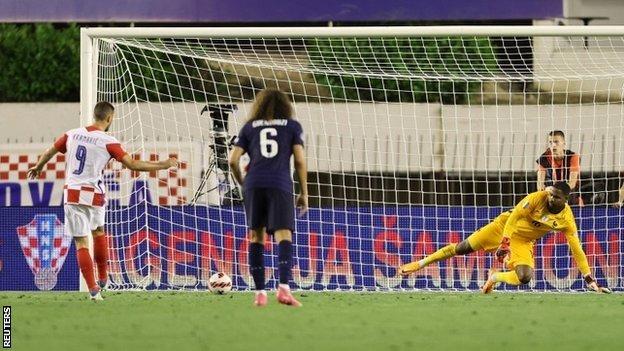 Defending champions France have one point from two Nations League games after being held by Croatia in Split.

They looked on course for victory when Adrien Rabiot’s cool finish from Wissam Ben Yedder’s ball gave them the lead.

But Andrej Kramaric scored a fine penalty after the video assistant referee awarded him a spot-kick following a foul by Jonathan Clauss.

Croatia had chances to win the game but Nikola Vlasic was denied by goalkeeper Mike Maignan, who was making his competitive debut, and Luka Sucic dragged a shot wide.

New Aston Villa signing Boubacar Kamara came on for his France debut in the second half.

The other game in Group A1 – Austria v Denmark – was delayed because of a power failure.