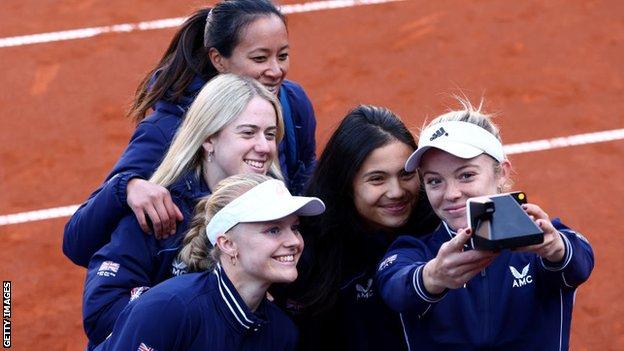 Glasgow has been chosen to stage the 2022 Billie Jean King Cup Finals, which means Great Britain qualify as hosts.

Anne Keothavong’s team had initially been set to miss out on the women’s World Cup of tennis after defeat by the Czech Republic in a qualifier in April.

They will now play at the 12-team event from 8-13 November at Emirates Arena.

“This is an amazing opportunity to build the profile of women’s tennis and focus attention on women’s sport,” Keothavong said.

“The entire team are thrilled about playing in front of a home crowd and hearing some loud support across the whole week.”

US Open champion Emma Raducanu made her debut in the competition against the Czechs this year, winning one match and losing the other, and if she plays is likely to be a star attraction for home fans.

They will compete in four round-robin groups of three, with the four group winners then qualifying for the semi-finals.

Current champions Russia are unable to take part because they are suspended from international events because of their nation’s invasion of Ukraine.

In March, Glasgow was also named as one of the four host nations for the group stages of the Davis Cup Finals, the men’s equivalent of the Billie Jean King Cup.

The Scottish city has hosted several Davis Cup ties, including two in 2015 when Great Britain went on to win the title.

It is the first time since 1991 that the finals of the premier team competition in international women’s tennis – previously known as the Fed Cup – has been played in Britain.

“We have said that we were ambitious to bring more major events to Great Britain and raise the profile of tennis across the whole year,” said LTA chief executive Scott Lloyd.

“This gives us a great chance to open up tennis to more people, and create special memories that we hope will inspire the next generation of players.”

International Tennis Federation president David Haggerty added that the LTA had presented “a very impressive bid” and that the organisers were looking forward to the event taking place “in front of passionate tennis fans from around the world in an electric atmosphere”.