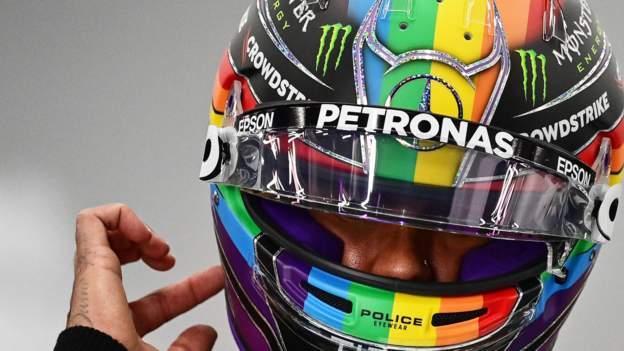 Leclerc lost control at Turn 22, a corner identified by drivers as one of the biggest challenges on the new Jeddah street circuit.

The crash, which badly damaged the Ferrari, brought the session to a premature end with five minutes to go.

The Dutchman leads Hamilton by eight points with two races of the season remaining.

The championship fight hangs in the balance, but in the context of each driver’s title hopes, it is more important for Hamilton to win in Saudi Arabia than Verstappen.

If Verstappen beats Hamilton, the Mercedes driver would need the Dutchman to hit trouble in the final race in Abu Dhabi to overhaul him. But Verstappen can afford to finish second behind Hamilton in Jeddah and still be more or less level on points.

Seven-time champion Hamilton was 0.061secs ahead of team-mate Valtteri Bottas. Alpha Tauri’s Pierre Gasly was third, 0.081secs off the pace.

Leclerc was taken to the medical centre for routine checks after the accident, but was soon released.

Ferrari checked the car and power-unit and said they would be able to use them again on Saturday.

Unusually, neither Mercedes driver set their best time on the ‘soft’ tyre, while Verstappen did, but could only improve very slightly from his best on the medium.

Both top teams seemed to be struggling to get the soft to work.

Verstappen was also complaining about the behaviour of the front end of his car.

Hamilton said he had enjoyed his first experience of the circuit, which has several sequences of high-speed ess-bends with hairpins at either end, and a slow chicane to start the lap.

“Rapid,” he said. “Unbelievably quick. It really is incredibly fast and a lot of grip. If you get the rhythm it’s a beautiful track.

“The medium and the hard tyre were faster than the soft. The soft is probably a little bit too soft for the high-speed sections. It seems like the tyre is giving up a bit.

“I’m generally happy. I made some changes between the sessions. I’m not sure which one I want to stay with. We will study it tonight and try to make sure we have the right set-up for tomorrow.

“We are not rapid on a single lap I would say compared to the others, but the long-run pace seemed like it was not too bad.

“Over a single lap they [Red Bull] are quite quick so we have a bit of work to do.”

Red Bull appeared a long way behind Mercedes when the teams simulated race-distance high-fuel running later in the session.

On average lap time over their runs, Verstappen was more than a second slower than Hamilton using the same tyre.

On both short and long runs, the Mercedes was gaining on the straights and in the slow first chicane, while the Red Bull gained back time in the quick left-right at Turns Seven and Eight.

Verstappen said: “We struggled to get heat into the tyres in FP2, which we will, of course, look into.

“Then we made a few changes from FP1 to FP2 which didn’t quite work but hopefully we can find the right balance come qualifying.

“There are a lot of things to work on and improve so we’ll see what we can do to get more pace out of the car overnight.”

Who could be quickest in the race?

Red Bull appeared a long way behind Mercedes when the teams simulated race-distance high-fuel running later in the session.

Hamilton was also fastest in the first session earlier in the day, but just 0.056secs clear of Verstappen.

Verstappen made a blistering start to the first session, well clear of the rest of the drivers for the first quarter of the session after quickly getting up to speed. But Mercedes upped their pace as the session went on to supplant him.

Verstappen was a couple of tenths of a second off Hamilton until a run right at the end of the session closed him up to his rival.

In the second session, Hamilton was 0.172secs quicker than Verstappen on the medium tyres when they did their first runs.

Neither Hamilton nor Bottas could improve on the soft tyres on their qualifying simulation runs. Verstappen also struggled to do so – but did in the end shave 0.077secs off his fastest time to edge closer to the Mercedes.

Behind Verstappen, the Alpines of Fernando Alonso and Esteban Ocon were fifth and sixth, ahead of Ferrari’s Carlos Sainz, Alpha Tauri’s Yuki Tsunoda, Red Bull’s Sergio Perez and Leclerc.