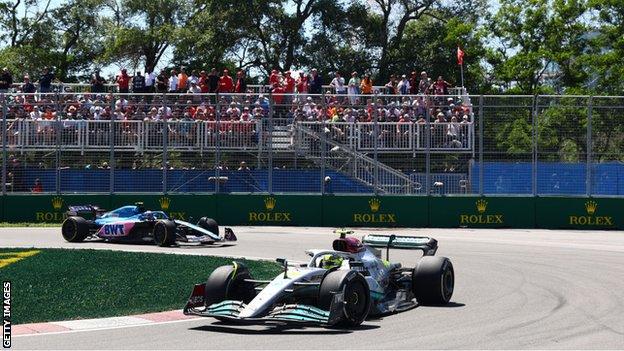 Lewis Hamilton says his podium at the Canadian Grand Prix has given him hope that Mercedes can return to competitiveness this year.

The seven-time champion had not scored a podium since the first race of the season and his result in Montreal ended a run of difficult races.

“It has given me a lot of hope there is more to come from this car, that the potential is truly there if we can get the set-up right,” Hamilton said.

Prior to Montreal, Hamilton had been out-qualified by team-mate George Russell for three consecutive races, and had not finished ahead of him since the first race of the season in Bahrain.

Partly, that has been due to Russell’s own highly impressive form this season. It remains an open question as to who will ultimately prove the faster, and there can be no higher compliment for Russell than that.

But there have also been bad luck and awkward circumstances for which Hamilton cannot be blamed. And at the same time the team’s more experienced driver has been taking on what has been more often than not the less effective choice out of a series of set-up gambles by Mercedes as they seek to get on top of their recalcitrant car.

After expressing how “so, so happy” he was to finally have a good weekend, Hamilton half-joked that “maybe the second half of the season George can do the experiments”.

More seriously, he said he thought that it was time for the team to not take matters quite so far as they seek to edge towards Red Bull and Ferrari on performance.

“We are just trying to progress as a team,” Hamilton said. “Moving forwards, we will be a little more cautious on doing too many experiments as it really does hinder you through the weekend, especially if you only have first and second practice in the dry.

“There are lots of learnings from this weekend and improvements we can make going forwards but really great pace today. It is so nice to see. That has not always been the case with this car.”

‘Still a lot of work to do’ at Mercedes

Hamilton finished only seven seconds behind race-winner Max Verstappen, as the Red Bull driver held off a late charge from Ferrari’s Carlos Sainz, and there were times during the race when he was matching the leaders’ lap times. But it is important to keep this in context.

The race was neutralised by a safety car with 20 laps to go, and resumed with only 16 remaining. Hamilton lost that margin in those laps, despite entering them hoping he could “just about keep up with them”.

As such, Canada did not mark a significant step forwards for Mercedes on performance. The car remained where it has been all year, about 0.8secs a lap slower than the Red Bull and Ferrari. It just showed better tyre degradation than them – so it moved towards them on pace as the stints developed.

Team principal Toto Wolff said: “One swallow doesn’t make a summer. We saw the swallow also in Barcelona [in May] but somehow it flew somewhere else.

“We were off the pace on Friday and we were good in the wet [in qualifying], respectable. Today at times we were with the quickest cars. In the second stint, Lewis and George were almost matching the front-runners on some laps.

“But we just need to be careful, there is is so much work we need to do to be back at the front and we are not yet there.

“We have scored four to five podiums and we are seeing glimpses of performance but it is far away from our own expectations of ourselves. You need to see a podium as a good result on merit and I’m happy for Lewis because he was really disadvantaged in some of the races where the safety car went against him. But still a lot of work to do.”

Mercedes feel they have dispensed with the aerodynamic porpoising problem that afflicted them in the early race of the season, but are still suffering with another key issue – bouncing caused by a very stiff suspension set-up.

They made progress in Canada by raising the car and running the suspension softer, but what succeeded in improving the car’s ride did not improve its performance.

This is a vicious circle that Mercedes do not yet know how to find a way out of. They expect to be more competitive at the next race, the British Grand Prix, because the long, fast corners and smooth track surface will suit their car.

But they do not have a key that will make the car as fast as a Red Bull or Ferrari. And until they find one, Hamilton’s hopes of improved performance will remain just that.

“We should manage our own expectations,” Wolff said, “and just grind away and look at the data and come up with some sensible solutions.

“We just need to get more load in the car, more downforce, and do that with a car that is not as low on the ground as we have expected. It is clear direction. You can see the [other] cars are going higher and this is where we need to find the performance.”

Despite their lack of performance, Mercedes are only 40 points behind Ferrari in the constructors’ championship, and Russell only 15 adrift of the Italian team’s lead driver Charles Leclerc in the drivers’ table.

But that is more a reflection of a dire run by Ferrari than anything else.

Canada contained some positives for Ferrari in their chase of Red Bull. Sainz was probably the fastest car on track – the Spaniard reckoned he was about 0.3-0.4secs a lap quicker than Verstappen. But that was not sufficient a performance offset to be able to pass the Red Bull in their race to the flag.

Sainz was pleased that “for the first time this season I could say I was the quickest guy on track”. But team boss Mattia Binotto said that his driver had made life more difficult for himself by leaving time out on track in qualifying.

Meanwhile, Leclerc recovered well enough from his position at the back of the grid following an engine penalty, but he found it harder to pass some of the slower cars than many expected, and fifth was a couple of places lower than some other teams’ strategy simulations had predicted for him.

And it meant he lost more points to Verstappen and now trails him by 49 points in the championship, with more engine penalties inevitable further down the line.

After the race, Binotto was trying to talk up Ferrari’s hopes. “He has fresh power-units for the next races and we have four races to the summer break where he can attack and recover some points if we can,” he said.

Most other people in the paddock, though, feel that Verstappen is now a sure bet for a second consecutive title.

The man himself is not taking anything for granted, however.

“It’s still a very long way,” Verstappen said. “I know the gap is quite big but it can switch around very quickly – race three, I was 46 points behind. We just need to stay calm and improve because today we were not the quickest.

“It swings a bit. Last weekend it looked good, now it didn’t look as good but we still managed to win and that is a quality. We just have to work together with the team to find little improvements in the car.”

He’s not really kidding anyone, though. Right now, Ferrari don’t look like a team that can mount a consistent challenge to Verstappen and Red Bull, and the onus is on them to prove that impression wrong.

One of the most disappointing aspects of the race was the way Fernando Alonso plummeted from his stunning second place on the grid to finish seventh on the road, behind even team-mate Esteban Ocon, who the veteran Spaniard complained during the race he had been “100 times faster” than during the weekend.

Seventh later became ninth after he was given a five-second penalty for weaving on the straight when defending from Valtteri Bottas late on.

Alonso’s qualifying lap was a marvel to watch, the car vividly alive as he chucked it around like a go-kart, bending it to his will, power-sliding it out of the final chicane.

The Alpine team were in awe of his performance, and so were many in the paddock, including Alonso’s rivals. And there was widespread delight – both inside F1 and among fans around the world – at his return to the sharp end.

He drove a strong first part of the race, losing ground to Verstappen and Sainz, but holding Hamilton at bay. But, as so many other times this season, luck deserted him.

When the second virtual safety car was called, Alonso had just passed the pit entry, and the race had gone green again just before he reached it next time around. So he had to stay out. That put him in a difficult position strategy-wise.

Worse, though, was that he suffered a problem with the engine’s hybrid system straight afterwards, costing him huge speed on the straights.

“At the beginning of the race I felt strong compared to Hamilton,” Alonso said, “we just didn’t have the pace of Verstappen and Sainz. But OK to control Hamilton and the Mercedes.

“And then the virtual safety cars, lucky or unlucky, that could change the race, OK. But we could still maybe be fighting for P3, P4.

“But then when the engine problem came, it was just trying to survive, trying to get the DRS, driving kamikaze in the corners before the detection [point], because the DRS was my only safety on the straights after that.

“I could not pass. But yeah, it was very frustrating because my car was flying this weekend.”

Reliability has been his and Alpine’s biggest problem this season, and here it was biting again.

“That’s disappointing,” Alonso said. “If we didn’t finish on the podium it’s because we had a reliability issue on car 14 and unlucky maybe with the virtual safety car, but the luck you cannot control. Reliability on car 14 should be a little bit better.”

Difficult race or not, though, Alonso made quite a statement in Montreal.