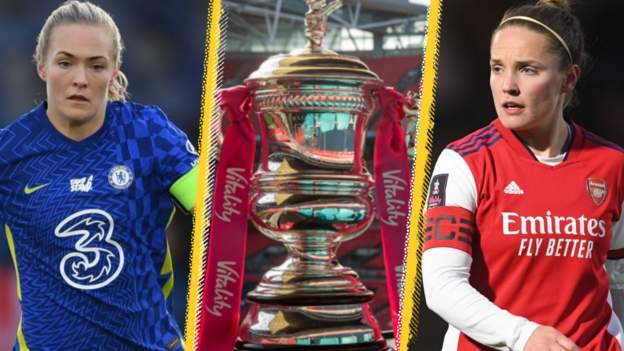 Arsenal are out to add to their record 14 cup wins when they tackle their rivals for a third time in six years.

Chelsea last lifted the cup in 2018 by beating Arsenal 3-1, while the Gunners won the final two years earlier.

The Blues could belatedly complete a domestic Treble after the competition was postponed because of the pandemic.

So 455 days after it began on 6 September, 2020 with an extra preliminary round, the 50th anniversary edition of the Women’s FA Cup finally reaches its climax on Sunday,

The campaign for Chelsea and Arsenal has been nowhere near as long, as they only came in at the fourth round proper in April.

Harder back for Chelsea, Heath among Gunners to miss out

“It’s a boost, both are big additions to our team,” she said.

What role the pair will play, however, Hayes could not say, as her squad will only assemble in full for the first time since the international break on Saturday – just 24 hours before the final.

England forward Nikita Parris is available for Arsenal after leaving the Lionesses’ camp before Tuesday’s victory against Latvia in order to get a “few days rest”.

Arsenal defender Leah Williamson, ruled out with a hamstring injury, said it is “gutting to miss” the showpiece.

“These are the games you play football for,” she told BBC 5 Live Breakfast. “Chelsea-Arsenal what a game, it’s rare that you get the top two teams fighting it out on this stage.”

Arsenal have steamrolled their way to a record-extending 17th final.

They have rifled home 27 goals and let in just one in four rounds, which started with putting 10 past Gillingham in April.

Joe Montemurro’s tenure as Gunners boss ended with a 9-0 victory against Crystal Palace in the last 16 and, after the pandemic-enforced pause, Eidevall was in charge to oversee their north London derby win against Tottenham in the quarter-final and last-four success over Brighton.

Chelsea have not tallied nearly as many goals, but they have been no less impressive on their way to this showdown.

They are yet to concede a goal in the competition and have still managed to score 15 in what has been a comparatively difficult route to the final.

It started with a 5-0 win against London City Lionesses in round four, then they cruised past fellow WSL sides Everton, Birmingham City and Manchester City to reach their first Wembley appearance in three years.

Chelsea captain Magdalena Eriksson said the form of both sides means the cup “will be anyone’s to grab”.

“It doesn’t really get better than that,” she added. “It will be a difficult task, we are well aware of that.

“They are in great form and, since that game [on the opening weekend of the WSL season], we have been in great form as well so it’s two teams that are really on their top form.

“It will be a 50-50 and it’s up to us to be ready for the game and show that we have learnt from the previous encounter at the Emirates.”

The Gunners edged that home league game in September 3-2 to inflict Chelsea’s only loss in all competitions this season.

Captain Kim Little, 31, is looking to win a fourth Women’s FA Cup, determined too that the pandemic-affected 2020-21 season does not go down as a barren one for the club.

“We want to win trophies every year and we’ve not done that, so we’ll be motivated to do that on Sunday,” she said.

“I have some great memories of FA Cups so I’m hoping to make more.”

‘A great showcase for the women’s game’

In the league, just one point separates Arsenal and defending WSL champions Chelsea after eight games.

Both are also well placed to advance to the quarter-finals of the Champions League, where Arsenal’s only loss in this campaign came against European champions Barcelona in the group stage.

Record 10-time Women’s FA Cup winner Katie Chapman, who collected the famous trophy with both Arsenal and Chelsea, says “it is hard” to pick a favourite.

She does, however, predict Chelsea – a club she works for as an ambassador – will come out 2-1 winners.

“Looking at both squads and how much talent they have got, there is strength and depth in both,” Chapman told BBC Sport.

“If anything will sway it, Emma Hayes has used her squad really well over the games that have come up. She has rotated the squad and managed to rest players.

“I’m sure it will be a great showcase for the women’s game.”