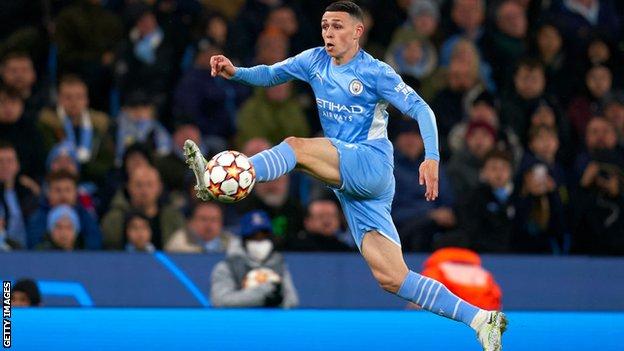 In a crucial week for Manchester City they need their star players to stand up.

Kevin de Bruyne and Phil Foden did exactly that on Tuesday as the two combined to give Pep Guardiola’s side a narrow 1-0 Champions League quarter-final lead over Atletico Madrid heading into next week’s second leg in Spain.

Though the Belgium international scored the goal, the post-match analysis centred around Foden, whose impact from the bench was almost instant, creating the goal 79 seconds after coming on in the second half.

It came when the 21-year-old showed quick feet and slipped the ball between the legs of Reinildo and into the path of De Bruyne to coolly slot into the corner.

“He came on with composure and had the clarity to cause havoc,” former Manchester United defender Rio Ferdinand said on BT Sport. “He came off the bench and was bang at it.

“Ninety-nine per cent of players come off the bench and don’t do anything, but the ones who do have the desire and concentration – within 80 seconds he decides the match.”

City manager Guardiola added: “Phil has a special quality [to change the game]. His space in the first steps are massive and he had the composure to make an incredible assist to Kevin.

“Phil was brilliant, we knew it in the beginning. With Gabriel Jesus and him, we needed to change the game when it was flat.”

‘Phil is the most unique footballer around’

Until England international Foden’s introduction in the 68th minute, City were frustrated by a well-organised and resolute Atletico backline.

They had managed only one shot on target by that point – De Bruyne’s free-kick pushed away by Jan Oblak. In a cagey affair, Atletico failed to muster a single shot of note to trouble Ederson in the entire contest.

But the game – and potentially the tie – changed through Foden’s fabulous skills to set up De Bruyne.

It was his seventh assist in the Champions League, with only Cesc Fabregas (10) providing more for an English club in the competition aged 21 or younger.

“Foden came on and played like he was in a playground,” former Premier League striker Dion Dublin said on BBC Radio 5 Live. “It is like the ball is stuck to his foot.

“He is always looking forward and being positive. The sky blue shirts changed their body language and they were all making runs when he came on.

“De Bruyne scored, but it all came from Foden’s vision, his pass and his quality.”

Former Manchester United and City midfielder Owen Hargreaves added: “Phil can do it as a false nine, winger or forward. He can be world class in a number of positions – that is special.

“Phil is the most unique footballer around and he is still at the beginning of his development.”

Foden now has 11 goals and nine assists in all competitions and has strengthened his case to start on Sunday against Liverpool – a match billed as the biggest of the season and one that could decide the Premier League title.

Despite his tender age, he has already won three Premier League titles, one FA Cup, four Carabao Cups and been a losing finalist in the Champions League and the European Championship with England.

“Phil impacts many games and is now impacting the big games,” former City defender Joleon Lescott added on BT Sport. “He definitely has to start on Sunday – part of the reason he did not start [against Atletico] was with that in mind.

“I know what it means for him to play for the club. If he continues at this rate, he goes down as the best English player of all time with two trophies a season.

“His mentality sets him apart. If you compare him with someone like Wayne Rooney, you can see players who are hurt when they don’t win. He is obsessed. I love what I do but he needs to do it.

“We had to remove the balls from the hotel because you could not get him off the training ground as he wants to improve all the time.

“His attitude is, ‘I have done this to get me here, why would I stop?’ He doesn’t do it for the accolades, he does it because he loves it.”