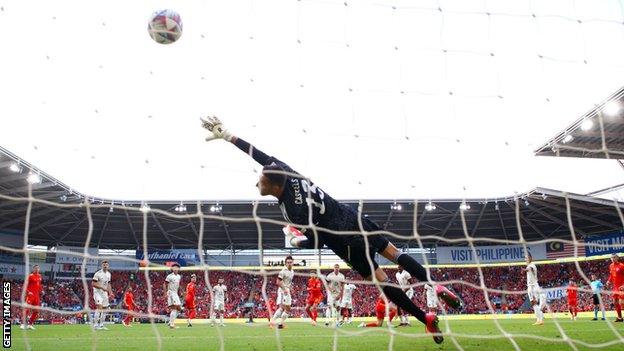 Ethan Ampadu thought he had given Wales the lead early on when he fired an effort into the top corner, only for VAR to rule an offside in the build-up.

Rob Page turned to his bench for a spark, and found it in Johnson and Rubin Colwill, who injected a new lease of life in Wales.

And the Nottingham Forest winger was on hand to calmly roll home Wales’ equaliser with five minutes remaining after a beautiful assist from Aaron Ramsey.

The linesman initially ruled the goal offside, but this time VAR was on Wales’ side, as Johnson was adjudged to be just onside.

The draw is a first point in the top tier of the Nations League for Wales, who suffered defeats by Poland and the Netherlands previously.

Wales started the brightest and thought they had taken the lead after five minutes.

Neco Williams’ cross to Joe Rodon eventually fell to Ampadu on the edge of the area, who hammered the ball into the top corner – only for VAR to correctly rule the goal out for offside.

Belgium threatened next, Leicester City midfielder Tielemans arrived late into the area after nice work by Thomas Meunier and Michy Batshuayi, but the returning Wayne Hennessey clawed the effort away.

The frenetic pace with which the game started continued, Gareth Bale the next to go close when he turned Dan James’ low cross just around Koen Casteels’ post.

It took 25 minutes before the pace finally dropped, but Yannick Carrasco tested Hennessey with a first-time effort at the back post after Kevin de Bruyne’s cross sailed over everyone.

And it was the Atletico Madrid winger who was played in behind the Welsh defence by Tielemans minutes later, only for Ben Davies to recover and make a crucial block.

At the other end Connor Roberts headed Joe Allen’s cross over at the near post, the move proving to be the last involvement in the game for the midfielder who walked slowly down the tunnel, replaced by Ramsey.

The Burnley full-back had Wales’ best chance of the first half minutes later.

An attempted clearance by Meunier ricocheted off the head of his own player straight to Roberts eight yards from goal in the centre of the box, but he never gained full control and eventually shot wide of the left upright.

Belgium really should have gone into the break ahead, as Leandro Trossard missed a chance the whole ground expected him to score.

De Bruyne found a huge pocket of space in midfield to drive into the Welsh half and played Batshuayi into the 18-yard box, but as is becoming a common theme in Welsh football matches, Davies was there to block the initial effort.

However, the rebound bounced across the box to an unmarked Trossard who had the whole goal to aim for, only to turn his effort wide of the left post.

The final chance of the half fell to De Bruyne, who caught everyone out with a long-range effort, but Hennessey got down smartly to turn the ball around his near post.

The warning signs were there in the first half, and as on Wednesday against the Netherlands, it took just five minutes for the visitors to open the scoring after the break.

A lovely move started down the Belgian right saw De Bruyne link up well with Trossard, the Brighton man fed Batshuayi and the Chelsea striker showed great composure to lay the ball off for Tielemans to strike into the bottom corner.

As they did against the Dutch, Wales responded well to going behind, Rodon found himself with a yard of space on the edge of the Belgian box, but blasted his effort high and wide.

The introduction of Nottingham Forest’s Johnson, in place of Bale, brought renewed energy to the Welsh attack, and the winger almost set up Ramsey for a tap in, but his cross was turned behind for a corner.

Wales almost levelled with six minutes left as Ramsey’s free-kick was floated perfectly for Rodon, but the stooping Spurs defender could only head over.

Less than a minute later it looked like VAR could deny Wales once more.

Neco Williams and Colwill combined well in the middle of the field before the Liverpool wing-back played a through ball to Ramsey.

Ramsey looked like he’d lost possession but back-heeled the ball to Johnson, who calmly curled the ball in at the far post, a goal which stood after a lengthy VAR check.

Unlike on Wednesday night against the Netherlands, Wales held on to secure a first point in the top tier of the Nations League.