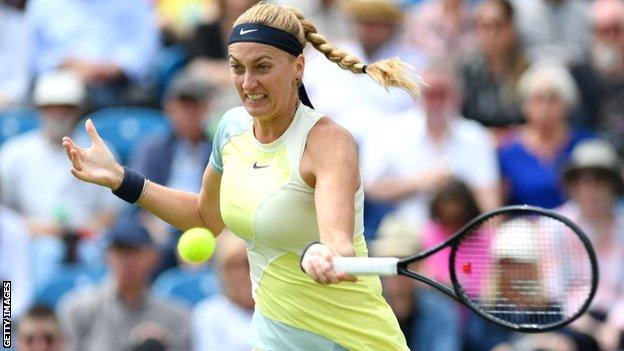 Two-time Wimbledon champion Petra Kvitova enjoyed the perfect preparation for the Championships as she beat Jelena Ostapenko to win at Eastbourne.

The Czech edged ahead in the first set and then saved five break points in one game to hold on to that advantage.

Defending champion Ostapenko fended off one championship point in the second set, but Kvitova served out to win.

“This was a tough match, well done to Jelena,” Kvitova said. “Playing on grass is very special for me and [especially] when you step on such a beautiful court as it is here.

“I enjoyed it a lot. It is really nice to play in front of people again – it is the best preparation for Wimbledon.”

Kvitova, seeded 25th at Wimbledon, is set to begin her campaign in SW19 against Italy’s Jasmine Paolini on Tuesday.