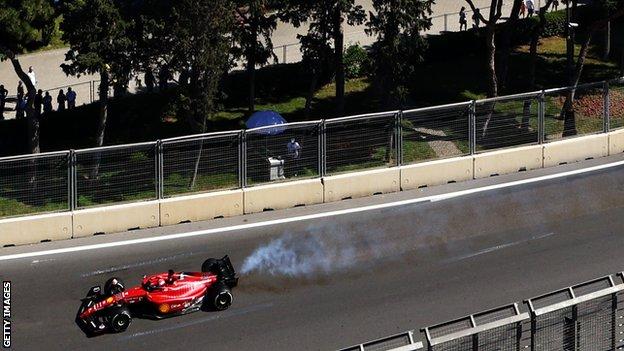 Charles Leclerc has avoided a grid penalty on the first day of the Canadian Grand Prix weekend despite his engine failure at the last race.

Leclerc is flirting with the limits on the maximum permitted number of components for a season after two engine-related retirements in the past three races.

Ferrari fitted a series of new engine parts to Leclerc’s car in Montreal.

However, they re-used an old turbo to avoid a penalty.

At least one grid penalty is inevitable for Leclerc at some point soon this season.

The 24-year-old, who was fifth fastest and slowest of the drivers from the top two teams in first practice at the Circuit Gilles Villeneuve on Friday, has suffered a major blow to his title hopes with a series of problems in recent races.

From a 46-point lead over title rival Max Verstappen after the first three races of the season, Leclerc is 34 points behind the Red Bull driver.

Leclerc retired from the lead of the Spanish and Azerbaijan Grands Prix with engine failures, the team bungled his strategy to cost him victory in Monaco, and a spin at Imola dropped him from third to sixth.

Meanwhile, Red Bull have won the last the five races, four of them falling to Verstappen and Monaco to team-mate Sergio Perez.

Ferrari have fitted a new internal combustion engine, MGU-K and MGU-H in Canada, but at least so far are reusing an old turbo, which is the part that would have given Leclerc a penalty because he had already used his maximum allowance of three this season.

Ferrari said they had investigated Leclerc’s engine failure and concluded the engine was beyond repair.

A statement said: “One possible cause of the failure is that it occurred as a consequence of the PU problem in Spain. We are now working on countermeasures to strengthen the package and the situation is under control.”

Alpha Tauri’s Yuki Tsunoda will have a grid penalty, though, having taken a new engine and exceeded his permitted allowance of all four engine components.

Verstappen set the pace in first practice, 0.246 seconds quicker than Ferrari’s Carlos Sainz. Alpine’s Fernando Alonso was third, despite settling his fastest time on the medium-compound tyres, which are harder and slower than the softs most used for their best times.

Perez was fourth, 0.461secs slower than Verstappen, and Leclerc fifth, 0.508secs off the pace.

Mercedes driver George Russell was sixth with Lewis Hamilton two places and 0.055secs behind his team-mate.

Hamilton was running a test floor, with a large oval-shaped cut-out as Mercedes continue to trial solutions to the “bouncing” problem they believe is restricting their performance this season.

Aston Martin’s Lance Stroll showed strongly in seventh at his home race, with team-mate Sebastian Vettel ninth and McLaren’s Daniel Ricciardo 10th. The second McLaren of Lando Norris was 12th, after his session ended early because of a technical problem.

Sainz had a narrow miss with a groundhog that ran on to the track late in the session.