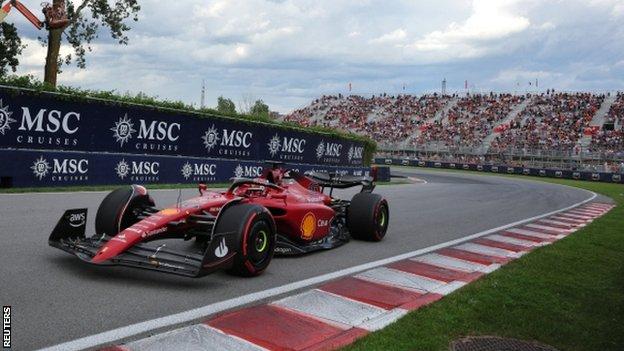 Ferrari’s Charles Leclerc will start the Canadian Grand Prix from the back of the grid as a result of a penalty for excessive engine usage.

The move follows two engine failures in the last three races that have dealt a big blow to Leclerc’s title chances.

Leclerc had already incurred a 10-place penalty on Friday in Montreal and on Saturday Ferrari took further new engine parts that increased it.

His race will now be one of damage limitation to his championship hopes.

Ferrari have given Leclerc a whole brand-new power-unit on Saturday at the Circuit Gilles Villeneuve – a new internal combustion engine, turbo, MGU-H and MGU-K.

Drivers are allowed to use only three of each of these elements this season, and the new parts take him to four already.

This is to add to the new electronics control unit that had already given him a 10-place grid penalty on Friday. That was his third – when only two are allowed.

Leclerc has suffered an 80-point swing in favour of title rival Max Verstappen after a series of problems in recent races.

And he is now likely to lose further ground to the Red Bull driver, who is made an overwhelming favourite for victory by Leclerc’s penalty.

Leclerc led Verstappen by 46 points after two victories and a second place from the first three races, from two of which the Dutchman retired.

But Leclerc has suffered two engine failures in the last three races, both times when he was in the lead.

He also lost victory in the Monaco Grand Prix after a Ferrari strategy bungle dropped him from the lead to fourth, while a spin in the closing stages of the Emilia Romagna Grand Prix turned a third place into sixth.

As a result, he starts the Canadian Grand Prix 34 points behind Verstappen, who ended Friday practice fastest after an impressive day in the Red Bull.

The news about Leclerc’s engine came at the start of a wet final practice session at the Circuit Gilles Villeneuve.

Fernando Alonso set the pace for Alpine, switching from the full wet tyre to the intermediate late in the session, ahead of Alpha Tauri’s Pierre Gasly and Aston Martin’s Sebastian Vettel, who did the same.

George Russell was the leading driver on the extreme wet tyre in seventh in the Mercedes.

Despite the slippery conditions, no-one crashed, although many drivers ran wide or had off-track moments as they adapted to the lack of grip, including Verstappen, who spun at Turn Two but missed the barriers.