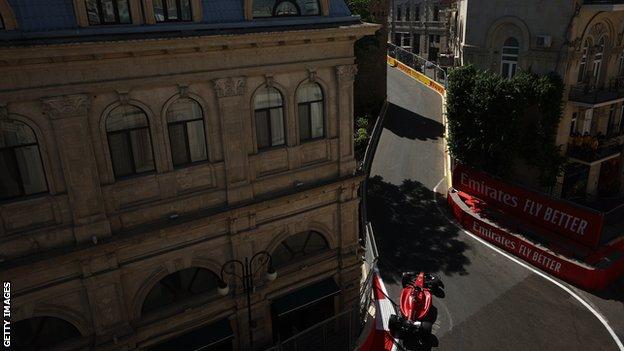 Leclerc, nine points behind Verstappen in championship, was 0.248 seconds quicker than Perez, with Verstappen a further 0.108secs adrift.

George Russell was the fastest Mercedes in seventh place, with Lewis Hamilton down in 12th.

Red Bull had looked the team to beat in the first session, in which Perez was fastest and when he and Verstappen were clearly faster on the straights – a key factor on a track where they are so long and overtaking is relatively straightforward.

But Ferrari’s deficit on the straights reduced in the second session, and Leclerc moved into his customary position this season as the one-lap pace-setter.

Verstappen’s outright pace was hard to judge because he had a disrupted session.

He took to the track late as the team made repairs to his rear wing, after it was fluctuating when the DRS overtaking aid was open during the first session.

Lewis Hamilton appeared to struggle in his Mercedes

Later, his qualifying simulation runs were disrupted by traffic and he did not set his best time on absolutely new tyres. And he managed to complete only two laps in race trim at the end of the session.

Nevertheless, Perez did appear the more comfortable Red Bull driver during the day, as Verstappen complained about understeer in the first session and then appeared to be struggling with a loose rear end early in the second.

As such, Perez appears set to continue his strong run of form, following his victory in Monaco last time out.

Leclerc, meanwhile, is in need of a strong result this weekend after Ferrari bungled his strategy in Monaco, dropping him from what should have been a victory to fourth place.

It was the latest in a series of mishaps which have seen Verstappen turn what had been a 46-point deficit after the first three races into a nine-point advantage.

Mercedes looked to be struggling, the car bouncing dramatically on the straights and neither Russell or Hamilton looking competitive at any point.

Behind Sainz, Alpha Tauri’s Pierre Gasly was sixth quickest ahead of Russell, with the Frenchman’s team-mate Yuki Tsunoda eighth, from the second Alpine of Esteban Ocon and McLaren’s Lando Norris.