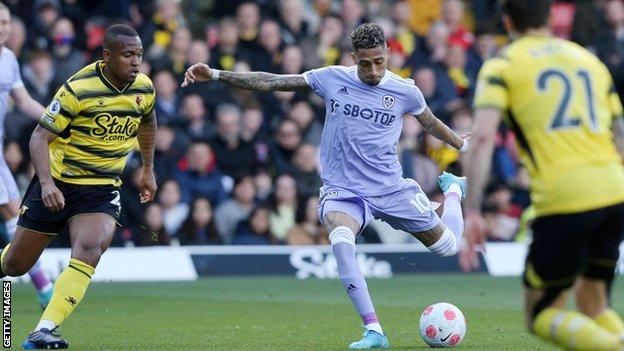 Leeds took a huge step towards Premier League safety with victory at fellow strugglers Watford, whose own survival hopes were dealt another blow at Vicarage Road.

Raphinha’s fierce left-footed strike from the edge of the area gave the visitors the lead after the Hornets had twice gone close through Imran Louza and Cucho Hernandez.

Ismaila Sarr squandered a golden opportunity to fire Watford level in the second half, before Rodrigo capitalised on a dreadful mix-up between Hassane Kamara and Samir to double the visitors’ advantage.

Leeds compounded Watford’s misery when Jack Harrison beat Ben Foster with a powerful shot into the far corner to complete the scoring.

The result leaves Watford six points from safety, while Leeds are now nine points above the drop zone – although they have played three games more than 18th-placed Burnley, who travel to bottom club Norwich on Sunday.

Watford manager Roy Hodgson will have taken heart from his side’s spirited display against Liverpool last weekend but, as was the case at Anfield, the Hornets were once again undone by poor finishing against the Whites.

They had the better chances before Raphinha’s well-taken opener, Louza sending a curling free-kick inches wide before Illan Meslier got his fingertips to Hernandez’s inswinging cross-shot from the left.

Sarr was also thwarted by Meslier after racing on to Emmanuel Dennis’ raking pass, but his effort would not have counted as he was in an offside position.

The Senegal winger missed an even better opportunity in the second half with the score at 1-0, sending a wild strike past Meslier’s left-hand post – an effort which sums up Watford’s plight.

Hodgson will be furious at the manner of Leeds’ second goal, as Kamara’s attempted clearance was deflected into Rodrigo’s path by Samir, allowing the Spaniard to round Foster and calmly slide into an empty net.

The visitors, who kept their first clean sheet in 18 Premier League matches at Vicarage Road, put the seal on a vital victory five minutes from time when Harrison drilled an unstoppable shot past Foster for his third goal in as many games.

Jesse Marsch’s Leeds have now picked up 10 points from their past four matches to put themselves within touching distance of safety, but Watford’s prospects look bleak after slipping to a ninth consecutive home defeat.

With trips to Crystal Palace, Manchester City and Chelsea still to come before the end of the season, the Hornets will need to improve their tally of seven points out of a possible 45 at Vicarage Road this term to stand any chance of avoiding the drop.