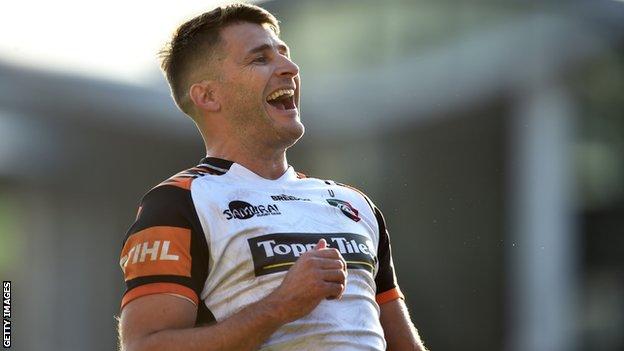 Youngs drops to the bench with 39-year-old Wigglesworth given the nod against a side where he won five Premiership titles and three European Cups.

Prop Mako Vunipola will make his 200th Saracens appearance in the final.

Sarries make one change from their semi-final win against Harlequins, with lock Nick Isiekwe coming into the side.

Isiekwe replaces former Scotland international Tim Swinson, who is left out of the squad in what was to be his final match before retirement.

Wigglesworth, who joined Leicester in 2020 after a decade in north London with Saracens, has started just seven games for Tigers this season – with Youngs the first choice, having started last Saturday’s semi-final win against Northampton.

Their inclusions add to the already strong links between the two sides, with Tigers head coach Steve Borthwick a title winner at Saracens himself.

Saracens reached the final in their first season back in the Premiership, following relegation for persistently breaching salary cap regulations, with a 34-17 win against London rivals Harlequins at the StoneX Stadium last weekend.

That punishment spared Leicester Tigers the drop in 2020, with Leicester only finishing above Saracens in the table that season.

Biggest game of my career – Genge

Tigers captain Ellis Genge – who, along with George Ford, will leave the club after Saturday’s final – said it has taken “a lot of hard work”, as well as “time and good people” to get Leicester to their first Premiership final for nine years.

The England prop, who will join Bristol next term, said the two seasons spent battling at the bottom of the table “were horrible and not nice to be part of”, but added that he refused to leave while the club struggled.

“I made a pact a long time ago that I would never leave Tigers if they were in a dark hole,” he said.

“I’ve still got my stuff in the changing rooms. I haven’t packed up, I still live up here, and I’ve got the biggest game of my career on Saturday.”

While Tigers have turned that around under head coach Borthwick, who guided them to a sixth-place finish last season before taking them to the summit this term, Genge emphasised how difficult the climb back to the top has been.

“It’s probably easier to lose than it is to win, especially when you are on a massive losing streak – no-one expects you to do anything,” he said.

“The hard bit is changing the habits and actually starting to win, which you have seen us do this year.

“It didn’t happen straight away, it was a lot of hard work and lot of good people putting their time in – a lot of time away from the scenes, outside of working hours – to get us to where we are.”

Saracens are aiming for a sixth Premiership title at Twickenham on Saturday.

Centre Elliot Daly says he is constantly learning and developing from playing alongside the likes of experienced internationals Owen Farrell, Jamie George and Mako Vunipola in the star-studded Sarries side.

The versatile England back, 29, is set to play in his second Premiership final, having lost 23-20 to Exeter, after extra time, when playing for Wasps in 2016-17.

“I’m an experienced player but the likes of Jamie [George], Faz [Farrell] and Mako [Vunipola] have been to five, six, seven finals and their conversion rate from getting to finals to actually winning is amazing,” he told BBC Radio London.

“It’s a brilliant lesson for me to lean into these guys. I’m experienced, but not in these situations, so it’s nice to see how much we can get out of them to push us forward to the weekend.

“It’s massive for me to win trophies with Saracens and hopefully we’ll win one on Saturday.”

Saracens returned to the Premiership at the first time of asking, beating Ealing Trailfinders in last season’s Championship final.

They finished this season second in the table and as the league’s top scorers, with winger Max Malins scoring a league-high 16 tries and flanker Ben Earl named Premiership player of the season.

South African World Cup winner Vincent Koch is set to play his final game before moving to Wasps on a “long-term contract” next season.