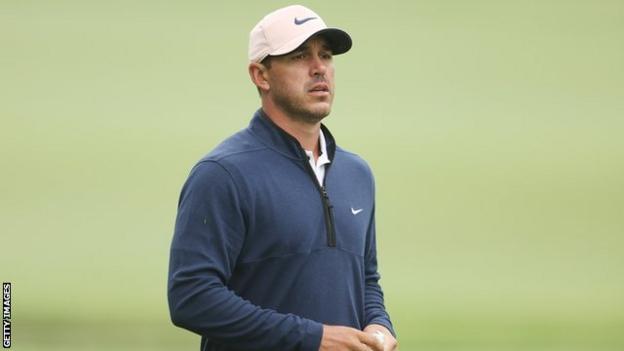 McIlroy, a staunch advocate of the PGA Tour, said he is “surprised” the former world number one is moving to LIV Golf.

“Am I surprised? Yes, because of what he said previously,” he said.

“I think that’s why I’m surprised at a lot of these guys, because they say one thing and then they do another and I don’t understand.

“I don’t know if that’s for legal reasons – I have no idea – but it’s pretty duplicitous on their part to say one thing and then do another thing. In public and in private.”

Speaking at the US Open last week, where he finished 55th after a poor weekend, Koepka complained that questions about the LIV Golf series were throwing a “black cloud” over the major.

“As I told the players [on Tuesday], let me be clear, I am not naive. If this is an arms race, and if the only weapons here are dollar bills, the PGA Tour can’t compete with a foreign monarchy that is spending billions of dollars trying to buy the game of golf,” Monahan said.

“We welcome good, healthy competition. The LIV Saudi Golf League is not that. It’s an irrational threat, one not concerned with return on investment or true growth of the game.”

Koepka had already withdrawn from Thursday’s PGA Tour event, the Travelers Championship, and has been described as an “incredible” addition to the LIV Golf series by its chief executive Greg Norman.

“The addition of Brooks is yet another example of the incredible fields LIV Golf is assembling as we build momentum in our first season and look towards the future,” Norman said.

The American is expected to play in his first LIV event at the second 54-hole, 48-man tournament that runs from 30 June to 2 July in Portland, Oregon.

He will join his brother Chase in the series and, on Tuesday, it was announced 31-year-old Mexican Abraham Ancer, the world number 20, has signed up to play on the LIV Golf series.

Norman added on Koepka: “There’s no understating the impact that Brooks Koepka has had on the game of golf in the last five years. He carries a championship pedigree and record of success as one of the most elite players in the world.”

The PGA tour suspended 17 members who participated in the first tournament at Centurion Club earlier in June, which was won by Charl Schwartzel, and it is likely Koepka will receive the same treatment.

The organisation said in a statement: “The players are being notified that they are suspended or otherwise no longer eligible to participate in the PGA Tour tournament play, including the Presidents Cup.

“As you know, players listed below did not receive the necessary conflicting event and media rights releases – or did not apply for releases at all – and their participation in the Saudi Golf League / LIV Golf Event is in violation of our Tournament Regulations. This same fate holds true for any other players who participate in future Saudi Golf League events.”

It was also announced on Wednesday that LIV players will be allowed to compete at the 150th Open Championship in July. The US Open also allowed LIV golfers to participate.