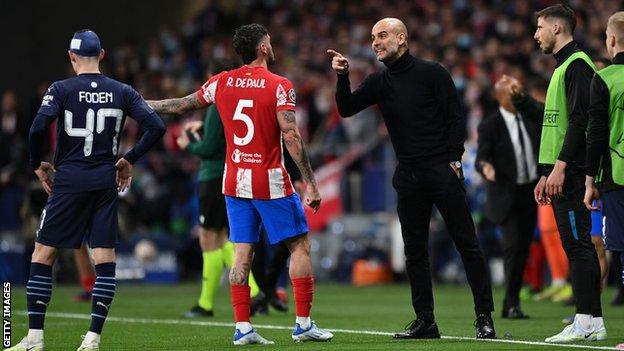 Manchester City’s superb Champions League victory over Atletico Madrid could have come at a cost, with Pep Guardiola admitting his side are “in big trouble” as a result of injuries picked up in the Spanish capital.

Both Kevin de Bruyne and Kyle Walker were forced off as City staged a defiant defensive display to claim a 0-0 draw at the Wanda Metropolitano, securing a 1-0 aggregate win.

Guardiola did not reveal the extent of the injuries but was clearly concerned, with Saturday’s FA Cup semi-final against Liverpool to follow.

The Reds made seven changes from Sunday’s high-intensity 2-2 Premier League draw at City, as Jurgen Klopp rested a number of key players in their Champions League last-eight tie with Benfica on Wednesday.

But Guardiola made just two for the tough test against the Spanish champions.

“Today we celebrate because it is the third time in Manchester City’s history we are in the Champions League semi-finals,” the City boss told BT Sport.

“But we can’t forget we played three days ago, travelled, came here, have a lot of injuries now and I don’t know what will happen in the next weeks.

“We cannot play all the time and score four or five goals, we are human beings – we come from a difficult game against Liverpool.

“We are in big trouble.”

Wednesday’s second leg in Madrid was a bruising encounter all round for City, who had to contend with an Atletico side showing far greater ambition than in a first leg where they failed to have a single effort at goal.

Diego Simeone’s side were also extremely physical, allowing this to spill over into ill-discipline late on, with Felipe seeing red for a dangerous follow-through on Phil Foden, having earned his first yellow card for an elbow to the same player that drew blood.

The second yellow sparked an on-field confrontation between both sets of players and those on the two benches. Former City defender Stefan Savic appeared to headbutt Raheem Sterling and pull Jack Grealish’s hair in the melee.

There was also a suggestion Guardiola had liquid thrown at him as he headed for the tunnel, while there were reports of more clashes and police having to intervene.

“Everyone saw the action, but I have nothing to say,” added the City boss.

“It is the champion of Spain and they played with energy and, in the second half, were better than us and we were lucky we didn’t concede. In the first half we had chances, overall we are in the semi-finals – it is well deserved.

“The opponent is so tough, all the teams in the Champions League come here and suffer so it is important we go through.”

Saturday’s FA Cup semi-final with Liverpool is the latest in a crucial run of fixtures for City as they look to claim a Treble of domestic and European trophies.

And both are now in the last four of the Champions league, with City looking to win the tournament for the first time – and on course for a final meeting with Liverpool, who face Villarreal in the other tie.

‘We kept our tempers’

City defender John Stones was superb in Madrid, producing an intelligent and resolute display, epitomised by a block to prevent Matheus Cunha’s close-range drive finding the net in the second half.

He too wanted to focus less on the unsavoury aspects of the game and more on his side’s achievement – one that showcased a maturity and clear growth to compete on Europe’s biggest stage.

“We knew it was not an easy place to come – it is a hostile environment. It was a difficult night all round and how we defended and controlled ourselves over the two legs was incredible,” Stones told BT Sport.

“We know that they sometimes try to make things happen like that and we dealt with it really well.

“It is not nice to talk about and I don’t want to dwell on it because over the two legs we played incredible against such an experienced side in what they do; we kept our tempers.”

Stones also praised Foden, who was the spark off the bench that helped fashion City’s winner in the first leg and looked to be the main target of Atletico’s aggression on Wednesday.

“Phil was such a threat in both games, instant impact in the first and how he drove us up the pitch tonight, gained yards and free-kicks – I think he is feeling it now,” added the England centre-back.

‘Atletico should be embarrassed’ – what the pundits said

BBC Radio 5 Live senior football correspondent Ian Dennis: “I don’t know where to start. It was an extremely chaotic finish. That was such an ill-tempered finish in the game.

“There were periods of play in stoppage time where a game of football wasn’t breaking out. The support from the Atletico fans was astonishing.”

Former Premier League striker Chris Sutton on BBC Radio 5 Live: “I don’t think I have seen anything like this in all my years playing and watching football. To see a team lose at home, to get knocked out and the atmosphere is incredible.

“It turned ugly at the end, we talked about the dark arts, but City saw it through. They were pushed, they were tested all the way.

“What I would say is, second half, City didn’t have the control. You felt it was building for Atletico and then Felipe cost them and it was buffoonery at the highest level. City were spooked by what happened.

“The main thing for City is they got over the line.”

Former Manchester United defender Rio Ferdinand on BT Sport: “Distasteful behaviour from the Atletico players, they should be embarrassed with some of the antics they have gone on with.

“You have to say, talking about football, well done to Atletico Madrid as they made Manchester City play in a way we haven’t seen for a long time, took them out of their rhythm and their stride.

“But some of the stuff towards the end was not what you want to see on a football pitch.”

Former England midfielder Owen Hargreaves on BT Sport: “That, at the end, from Atletico Madrid was a disgrace.

“They played so well in the game, they don’t need all that rubbish, all those antics – late challenges, yellow cards, red cards, pulling hair.”

Ex-Manchester City defender Joleon Lescott on BT Sport: “Overall, Atletico did well in the second leg, but the last 10 minutes, you can’t condone that.”