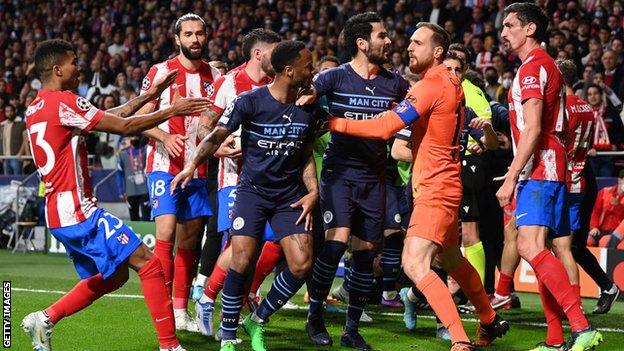 Manchester City produced a mature and disciplined performance to hold off the challenge of Atletico Madrid – and set up a Champions League semi-final showdown with the Spanish side’s city rivals Real.

Knowing a clean sheet would be enough to seal the tie, City kept their cool in the face of a hostile home crowd and intimidation from a physical Atleti side showing far more ambition than in the first leg.

Ilkay Gundogan could have made life much easier for Pep Guardiola’s men by slotting in from close range, instead of against the post in the first half.

But in the face of much-increased pressure and a home side pushing desperately for parity, City put up a resolute rearguard action to confirm their progression to the last four.

Atletico ended the fiery contest with 10 men when defender Felipe was shown a second yellow card for a dangerous follow-through on Phil Foden, having received his first for an arm that drew blood from the England international’s head.

Real Madrid, who edged past Chelsea in a thrilling quarter-final tie on Tuesday, now stand between City and a second successive appearance in the final of Europe’s premier club competition.

Having lost to Thomas Tuchel’s Blues in last season’s final, Guardiola’s side are seeking a maiden Champions League title in a campaign where they are still challenging on three fronts.

They lead the Premier League by one point from second-placed Liverpool – and face Jurgen Klopp’s Reds in an FA Cup semi-final this Saturday.

City have grown accustomed to controlling games of football at this level, strangling the life out of teams through sheer volume of possession before surgically picking them off in what are often benign, one-sided encounters.

For 45 minutes here, though, they were given a taste of their own medicine and forced to dig deep against extreme pressure from an increasingly desperate opponent, whose ill-discipline in stoppage time should could easily have resulted in further red cards.

It is a huge feather in City’s cap that they were able to hold firm against repeated attacks and then keep their heads as Atletico were losing theirs.

It is a shame that the credit the home side’s attacking display deserved was largely overshadowed by their unnecessary antics. They included a potential headbutt from former City centre-back Stefan Savic on Raheem Sterling – and hair pull on Jack Grealish – during an unsavoury melee involving both sets of players and the two benches after Felipe’s foul on Foden.

Clashes also continued at full-time as both sets of players made their way down the tunnel.

Prior to this, the 90 minutes had showcased a different approach from the Spanish champions in comparison to a first leg in which they operated largely in a 5-5-0 formation and failed to muster a single effort on goal.

Roared on by a vociferous home crowd, they pressed fiercely, harrying the City players all over the pitch.

Having stayed in the tie for three quarters of it – with Geoffrey Kondogbia’s blocked 35th-minute effort their solitary shot across both legs – the hosts came out swinging for the second period.

Antoine Griezmann went close, as did Rodrigo de Paul, Matheus Cunha and Luis Suarez, as boss Diego Simeone threw every attacking option he had onto the field in the hope of breaking the visitors down.

But this is not an easily intimidated City side, nor does their elite attacking prowess come at the expense of defensive frailty, even when injury affected Kevin de Bruyne and Kyle Walker and forced the introduction of Nathan Ake.

John Stones was immense, with a block to deny a Cunha effort from close range the highlight of an intelligent and dogged display.

Keeper Ederson was also called upon for a heroic moment, saving superbly to stop Angel Correa’s shot after the ball had broken to the Atletico man in the box in the 11th minute of added time.

Celebrations were mixed among the confrontations at full-time, but City have little time to rest after this epic energy-sapping encounter.

Saturday sees them face Liverpool in the FA Cup semi and, two weeks from now, Real will visit the Etihad.