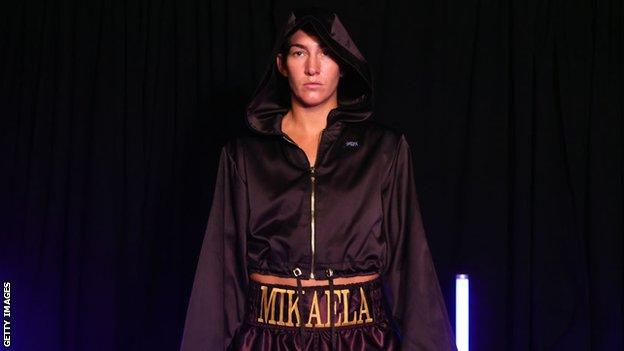 “I was definitely always meant to do something big,” Mikaela Mayer says, even if she wasn’t always sure exactly how this was going to be.

Now a unified super-featherweight world boxing champion, as a young teenager she was touring the US in a heavy metal band. At that time her future appeared to belong in music.

“I feel like I’ve lived like three lives,” Mayer says. “Before boxing I was a little metal head, my nose was pierced, my tongue was pierced, I had my ears pierced, hair was black, everything I wore was black, it was definitely a fun time. [Nita Strauss] was my singer and guitar player at the time. Now she’s the lead guitarist for Alice Cooper, killing it.”

It was Mayer’s nature to give everything, or nothing. When she’d had enough, she abruptly quit that band.

“I had my little rebellious teenage stage, just out partying, being a bad kid, driving my dad crazy, not coming home for weeks at a time. And then I came back around and was like OK I need to refocus myself,” she recalls.

She went to a gym down the street. That was enough for her to commit to boxing with the same intensity. “I was smoking a pack of cigarettes a day when I first walked into this gym and within a week I was like, well, can’t do this anymore. I want to be the best female fighter in the world,” Mayer remembers.

“It sounds psychotic but I guess you’ve got to be a little crazy to have dreams like this. So I went home, told my dad and he was fully supportive, seeing as what I was doing, he was like, ‘Yes let’s box, let’s do something positive’.”

Eventually she would get on the USA team and box at the 2016 Olympic Games. After that tournament she hadn’t been sure where to turn next.

“I knew that I was done with the amateurs. I just didn’t know where to go from there and I considered MMA,” she recalls. “I was going to go to MMA because that’s where women were getting the TV time, the contracts.

“It was time for me to challenge myself somewhere else and I was willing to get kicked in the head to do that.”

Instead, she ultimately signed with US promotional powerhouse Top Rank. Now, aged 31, she is a unified WBO and IBF super-featherweight world champion and unbeaten in 16 pro fights.

Mayer issued a statement of intent in her last fight. Instead of relying on her movement and skills, she turned her November unification against Maiva Hamadouche into an intense, all-out battle from the first bell. It was one of the best fights, men’s or women’s, of 2021.

Mayer will seek to retain those titles on Saturday in California against Jennifer Han. The 38-year-old American challenger will be a clear underdog but has previously gone the distance with Ireland’s undisputed lightweight champion Katie Taylor.

“It was a tougher fight than [Taylor] thought and it also will give people a chance to compare me. To see where I’m at,” Mayer says. “This fight is another chance for me to show my versatility. I’ll not bang it out like I did with Hamadouche.”

“No fight is an easy fight,” she continues. “[Coach Al Mitchell] trusts me that I’m going to win but it’s how I win. Especially being a female in this era of boxing for women, when we’re trying to grow the sport and trying to close the gap of equality and get the respect that we deserve, he wants me to look good. He doesn’t want me to coast by and get a win. He wants me to look impressive.”

If she is successful against Han, Mayer will look to challenge the winner of Taylor’s fight with Amanda Serrano, which takes place at the end of April.

“I would love that. I wanted to go undisputed at 130lbs but I’m not going to sit around and not try and take the biggest fights I possibly can in the meantime,” Mayer says.

“They both have such different styles and such different backgrounds. I know Katie Taylor has been a pro for five years but she still has an amateur style to me. A good one, a great one – it’s worked for her, she’s undisputed.

“Serrano’s the opposite. She has a very, very sound pro style. So it’s going to be a battle of styles. Who has the better gameplan, more disciplined throughout the 10 rounds, we’ll see.”

Mayer, though, would be happy to fight either.

“I want to see myself on the top of that pound-for-pound list, no doubt,” she adds. “If I went up against someone like Katie Taylor or Serrano, beating them would definitely solidify my place. I’ll leave the sport knowing that I challenged the best.

“I’m willing to leave it all on the line.”