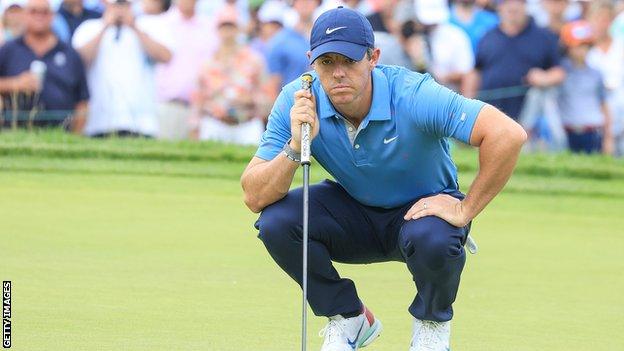 Rory McIlroy is delighted to be in a strong position to challenge for the title over the final two rounds of the US Open at Brookline.

The 33-year-old Northern Irishman is in a share of third place at halfway, one shot behind Americans Collin Morikawa, the Open champion, and Joel Dahmen.

He tees off in the third round at 20:23 BST alongside American Aaron Wise.

“I’m playing as good a golf as I’ve played in a long time,” said the four-time major champion.

McIlroy, the winner of last weekend’s Canadian Open, has not won a major title since the 2014 PGA Championship.

But he has put himself in contention to add to that tally with his four-under total which puts him alongside Wise, Spain’s defending champion Jon Rahm and Americans Hayden Buckley and Beau Hossler.

“I have to go out with the mindset this week that I’m going to try to win my first again,” he added.

“I have a lot of experience. Yes, I’ve won major championships and other big events, but just because I’ve done that, it doesn’t mean that I’ll hit better golf shots or I’ll hit better putts.

“I’m in a good place. I’m really happy with where my game is at, and I think that’s the most important thing.”

“You want to go up against the best to try to bring the best out of yourself,” he said.

“And to see Collin and Jon and Scottie up there and whoever else, that’s what major championship golf is all about. That’s what competition is all about.

“That’s competition, and that’s at the heart of this game. I’m excited to be in that mix going into the weekend.”