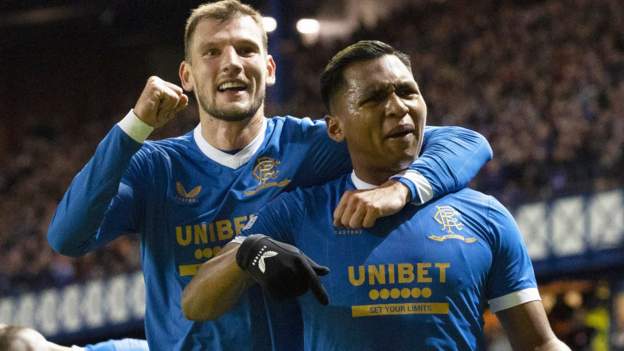 A brace from Alfredo Morelos gave Giovanni van Bronckhorst a debut victory as Rangers manager and sent his side into the Europa League knockout round at the expense of Sparta Prague.

Morelos swept home in the first half to give Rangers control early on, before capitalising on a bizarre mistake by Sparta’s Filip Panak after the break.

The victory, along with Brondby’s defeat by Lyon, means Rangers are guaranteed to finish in second place in Group A courtesy of a superior head-to-head record against Sparta.

The Scottish champions will face one of eight teams dropping out of the Champions League over two legs in February for a place in the last 16 of the Europa League, with their final group game against section winners Lyon on 9 December now effectively meaningless.

Van Bronckhorst was making his first appearance as the new Rangers boss following Steven Gerrard’s departure for Aston Villa and enjoyed watching his side earn a comfortable win.

They took advantage of shambolic defending by their visitors – who had beaten them 1-0 in the reverse fixture in the Czech Republic – as James Tavernier’s straight ball into the channel was latched onto by Ianis Hagi, who stretched to cut back for Morelos to side-foot home.

Joe Aribo hit the bar then missed from close range, and four minutes into the second half, Rangers were gifted the crucial second goal they needed to overturn their head-to-head deficit.

Panak crossed directly for Morelos as Sparta attempted to play out from the back, and the Colombian gleefully headed in to become the fifth-highest scorer in Europa League history.

He was denied a hat-trick by Sparta goalkeeper Dominik Holec, who also denied Ryan Kent. Rangers earned victory despite a late flurry from Sparta when Allan McGregor pulled off a spectacular double save from Ladislav Krejci and Matěj Pulkrab.

Man of the match – Alfredo Morelos

What did we learn?

With just a few days to work with the players since their 3-1 Scottish League Cup semi-final loss at the hands of Hibernian, Van Bronckhorst was never likely to introduce major changes.

However, he did tweak the shape to a 4-2-3-1, with Aribo playing as the central number 10 with Kent on the left and Hagi on the right. The latter pair stretched the play wide, while Aribo had three good chances to score after making good runs from his central position.

The attacking shape allowed Rangers to go more direct and, in doing so, they brutally exposed the gaping space left in the channels by the Sparta defence.

It was a generous offering from the visitors, who pinned Rangers back at times and stopped them playing through the middle. However, it was a great start for Van Bronckhorst, who was thrown into an important game on the back of a difficult result and got the required response quickly.

Rangers manager Giovanni van Bronckhorst on BT Sport: “From the first minute on, we were in the game. We were pressing them with a good rhythm of play and creating chances.

“We created enough chances in the first half to win the game. I was really proud of the guys, they did really well and kept pushing for the win.”

Rangers are away to Livingston for Van Bronckhorst’s first Scottish Premiership game at the helm on Sunday (12:00 GMT).