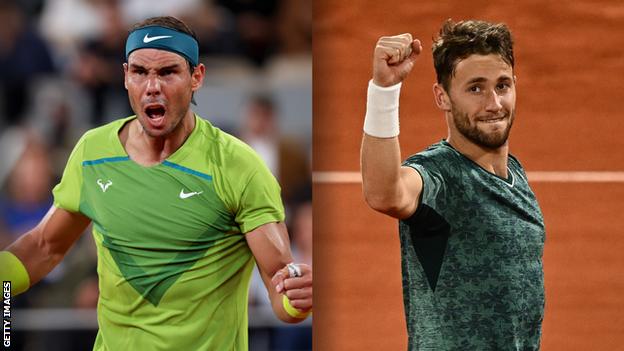 Rafael Nadal will bid for a record-extending 14th French Open title when he meets Casper Ruud on Sunday, in a meeting between master and student.

The Spaniard, who turned 36 on Friday, recorded a 111th win on the Paris clay to reach a 14th final at Roland Garros.

“He’s playing a student from his academy so it’s going to be fun. It’s something I’ve dreamed of,” Ruud said.

First-time finalist Ruud, the first player from his country to reach a singles final at a Slam, added: “Nadal is the last of the very top players in the world I have never played against.

“I guess this is perfect timing and worth the wait. To finally play him in a Grand Slam final will be a special moment for me.”

Fifth seed Nadal was leading 7-6 (10-8) 6-6 when semi-final opponent Alexander Zverev was forced to retire because of injury on Friday.

That result meant he became the second oldest men’s singles finalist in French Open history, behind American Bill Tilden, 37 when runner-up in 1930.

The Spaniard said he has “huge respect” for first-time major finalist Ruud, with whom he has often hit at the Rafa Nadal Academy, although they are yet to meet on the tour.

“Casper is a professional,” Nadal said. “He has a very good character for tennis. He’s very relaxed, humble. He’s always in a positive mood about learning.

“I think in the academy we were able to help him a little bit during this period of time but, more than anything, I like to see good people achieving their dreams.

“I’m happy for him, I’m happy for his mum and dad, who I know very well. For me it is not a big surprise. He did a lot of great things the last couple of years.”

Victory on Sunday would take Nadal a second title clear of 20-time major winners Novak Djokovic and Roger Federer in the race to finish on top among the ‘big three’.

He had feared his career was over last year when a chronic foot problem restricted him to one tournament in the final seven months of 2021.

But he won the Australian Open in January to complete an incredible comeback and, after missing six weeks because of a rib stress fracture sustained in March, now stands on the verge of back-to-back major triumphs for the first time since 2010.

“Physically, I’m OK. Normally my problem is not the physical performance,” said Nadal, who suffers from the degenerative foot condition Mueller-Weiss Syndrome.

“I was not very positive after [the Italian Open earlier in May] about my foot, but I was positive that I will be able to play here.

“That means a lot to me. All the sacrifices and all the things that I need to go through to try to keep playing really make sense when you enjoy moments like I’m enjoying in this tournament.”

Ruud, projected to rise to a career-high world number six on Monday, has enjoyed a stellar season on the clay and leads the ATP Tour for total wins (66), titles (seven) and finals (eight) on the surface in 2022.

He had never been beyond the fourth round of a Grand Slam, but overcame the experienced Marin Cilic to set up the biggest match of his career, where he will face an opponent who has long been an inspiration.

“Rafa has been my idol all of my life,” said Ruud, who would become the youngest Grand Slam men’s champion since Juan Martin del Potro at the 2009 US Open.

“He has played so many finals, but at least he is playing a student from his academy this time.

“I could probably tell you all the finals, who he has played and who he has beaten, because I watched them all on TV. It’s going to be amazing to be there myself.”

The last player to triumph in his first Grand Slam quarter-final, semi-final and final at the same event was Nadal, at Roland Garros, in 2005.

“To play Rafa in a Roland Garros final is probably the greatest challenge there is in this sport,” Ruud added.

“We all know what a great champion he is and how well he plays in the biggest moments and the biggest matches.

“I will need to play my best tennis ever. But I still have to believe that I can do it.”