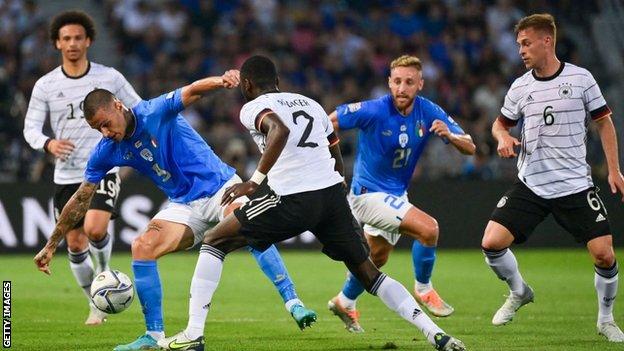 An inexperienced Italy began their rebuilding job with an impressive home draw with Germany in a Nations League opener for both sides.

Having failed to qualify for this year’s World Cup in Qatar, Italy opted to test out numerous raw players.

One of them, 18-year-old substitute Wilfried Gnonto, set up Lorenzo Pellegrini for a 70th-minute goal.

Germany levelled immediately, with Joshua Kimmich firing in to make it 10 games unbeaten under Hansi Flick.

Germany’s next game in Group A3 is a home match against England, who were beaten 1-0 in Hungary earlier on Saturday. Italy host the Hungarians, with both games on 7 June.