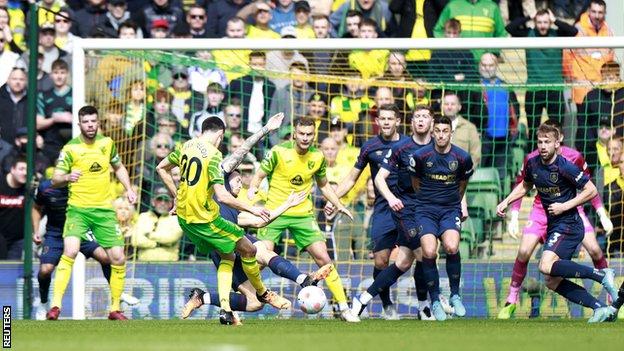 Bottom club Norwich City kept alive their slim hopes of avoiding a quick-fire return to the Championship and dealt a blow to fellow strugglers Burnley with a crucial win at Carrow Road.

French midfielder Lees-Melou’s ninth minute deflected shot, which went in off the post, put the hosts on their way before Pukki drilled home the second to give Norwich a glimmer of hope of staying up, with Dean Smith’s side now seven points from safety with seven matches left.

Burnley had their moments, with Maxwel Cornet, the match-winning hero against Everton in midweek, missing a glorious chance from three yards out.

In what was a must-win game, Norwich’s defence came under relentless pressure at times but withstood everything that was thrown at it to record back-to-back clean sheets in the league for the first time since October.

The result leaves the Clarets 18th in the table, four points from safety with eight matches remaining.

Gritty Norwich show fight – but have they left it too late?

But Smith’s side passed the pressure test in style with a first win in nine league games.

It will still require a monumental effort for them to survive. Three of their final seven matches include teams challenging for Europe – West Ham (home), Tottenham (home) and Manchester United (away).

Smith said before the match he still had belief, and his players responded with a thoroughly professional performance against a team with renewed belief following their midweek win over Everton.

Even before Lees-Melou’s goal, Milot Rashica forced Nick Pope into a diving save, while the Burnley keeper prevented Pukki from scoring by saving with his legs.

Just as impressive for Smith was his side’s performance at the back.

Norwich made several vital blocks to frustrate Burnley, including one by former Clarets defender Ben Gibson to keep out Ashley Westwood’s volley.

In the closing stages, Grant Hanley headed against the bar while Pope denied Rashica before Pukki had home fans celebrating a rare win.