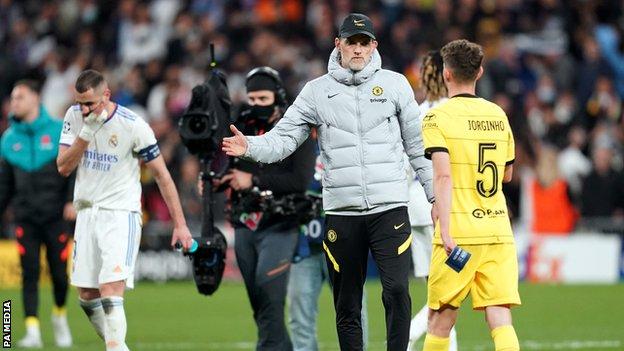 Thomas Tuchel says there are “no regrets” after holders Chelsea were knocked out of the Champions League by Real Madrid in a classic clash.

Trailing 3-1 from the first leg, the Blues forced extra time against the record 13-time winners at the Bernabeu before losing 5-4 on aggregate.

“These are the kind of defeats we can digest and swallow as we left nothing to regret out there,” said boss Tuchel.

“It was not meant to be. We were simply unlucky.”

Many had written off Chelsea’s hopes against Real, but when Timo Werner scored to make it 3-0 on the night in the 75th minute, the Blues were 15 minutes away from a sensational feat.

However, Rodrygo’s volley brought the scores back level on aggregate five minutes later before Karim Benzema – a hat-trick hero at Stamford Bridge six days earlier – headed the decisive goal which sent Real through.

“We showed the quality and character this team has and deserved to go through,” added Tuchel. “There is nothing to regret.”

However, the Chelsea boss was critical of the mistakes over two legs which led to Real’s goals.

“We had a huge deficit to overcome because we did big mistakes in the first leg and today both goals come from mistakes from us,” added Tuchel.

“They took advantage of the mistakes with individual quality and that was enough because over the two legs we did too many of these big mistakes.”

‘Punished for our mistakes’

Chelsea do not have long to recover from going out of Europe as they prepare to make a second visit of the season to Wembley.

They face Crystal Palace in an FA Cup semi-final on Sunday (16:30 BST) – a competition that offers them their last chance of landing a major domestic trophy.

Despite enjoying success in the Fifa Club World Cup and Uefa Super Cup, they lost a penalty shootout to Liverpool in the Carabao Cup final and are 12 points behind leaders Manchester City in the Premier League with just eight matches left.

“The positive is we didn’t give up,” said defender Rudiger.

“Not many teams can come and dominate Real Madrid as we did. But over the two legs if you make these kind of mistakes like we did, you get punished.

“It was a do or die for us. I think before the game not everybody thought we would have the 3-0. For them the individual class comes to light with Luka Modric and Benzema.”

Former England keeper Rob Green is worried the energy-sapping 120 minutes in Spain’s capital could take its toll on Chelsea as they prepare for Wembley.

“Chelsea invested so much in the game. They put hearts and souls into this game,” Green, speaking on BBC Radio 5 Live, said.

“Real Madrid looked lost. They looked like they didn’t have a clue, like they were short of confidence. But they have players who produce moments.”

Former England midfielder Karen Carney, speaking on 5 Live, added: “You can’t complain. This leg wasn’t the one that sent Chelsea out.

“They have conceded five goals over the two legs. Last season they were built on defence. You have to have a clean-sheet mentality. They leave themselves open at times.”