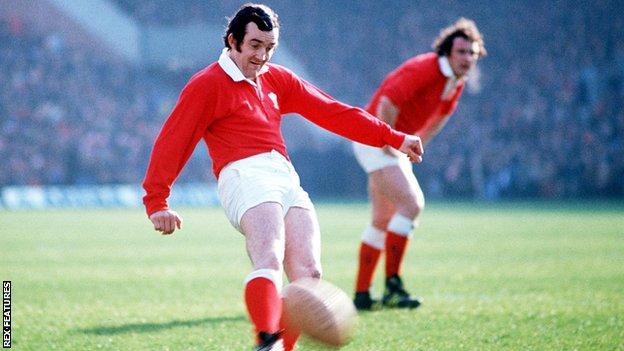 Phil Bennett, the legendary Wales and British and Irish Lions captain and fly-half who has died at the age of 73, elevated rugby union to an art form.

Fleet of foot and blessed with a brilliant rugby mind, he is regarded as one of the game’s all-time greats.

He also captained his country and the Lions, and dazzled for the Barbarians.

During the Baa-Baas’ 1973 victory over New Zealand, Bennett demonstrated his spellbinding footwork to spark the move which culminated in a try for Gareth Edwards which is often described as the greatest in rugby union history.

The audacity to take on four All Blacks just a few metres from his own try line – and the dexterity to dance past them and leave them floundering in his wake – illustrated Bennett’s genius.

So too did his try for Wales against Scotland in 1977, another sweeping team move which Bennett finished with a trademark step and run. As the esteemed commentator Bill McLaren said at the time, it was “absolute magic”.

Bennett was born in Felinfoel, a village near Llanelli, on 24 October, 1948.

He worked in the local steel works during his teens and, as a promising schoolboy footballer, he was offered a trial by West Ham.

Once Bennett committed to rugby, he quickly rose to prominence with his beloved Llanelli and was a part of the team which beat the mighty All Blacks in 1972.

By that point, he was already a fully-fledged international, having made his Wales debut as the country’s first replacement in 1969.

Bennett had to bide his time to establish himself as Wales’ first-choice fly-half because the 10 jersey at the time belonged to another giant of the game, the great Barry John.

When John retired aged only 27 in 1972, Bennett emerged from his shadow and made the fly-half position his own.

He wore 10 for the Lions on their historic unbeaten 1974 tour of South Africa, amassing 103 points and scoring a spectacular solo try in the second Test in Pretoria.

Even Bennett’s place in the Wales side was not guaranteed, though. In 1975 he was dropped for John Bevan, but an injury to the Aberavon fly-half opened the door for his return.

With Bennett back in the team, Wales won the Five Nations Grand Slam in 1976 and, when the career of Wales skipper Mervyn Davies ended the following year, it was Bennett who assumed the captaincy.

A cheery and affable character, Bennett gave a glimpse of his tougher side when he delivered a memorable team talk before Wales’ Five Nations match against England in 1977.

“They’ve taken our coal, our water, our steel. They buy our homes and live in them for a fortnight every year. What have they given us? Absolutely nothing,” went his passionate rallying cry.

“We’ve been exploited, controlled and punished by the English – and that’s who you are playing this afternoon.”

Later that year, Bennett led the Lions on their tour of New Zealand and, although that series ended in defeat, there was still time for a glorious closing chapter.

With a Grand Slam on the line as France came to Cardiff on the final weekend of the 1978 Five Nations, captain Bennett rose to the occasion magnificently with two tries to lead his side to a 16-7 win and a second clean sweep in three years.

As Wales’ jubilant fans celebrated a third Grand Slam of the 1970s, little did they know of the conversation Bennett was having with his half-back partner and arguably the greatest player of them all, Gareth Edwards, in the home changing room after the final whistle.

“I knew it was going to be my last game, but I didn’t tell anyone beforehand,” Bennett recalled years later.

“I didn’t want this game to be about me, this was a great Welsh team, we had just achieved the triple Triple Crown and were going for a second Grand Slam in two years.

“So there was no big farewell to the crowd or anything like that.

“Afterwards, I walked into the changing room and I went up to Gareth and said thanks for everything and he replied, ‘Bloody hell, you’re getting out as well. Me too’.”

That was Phil Bennett. Understated, humble, class to the last.

After retirement, he worked as a pundit for BBC Wales and was a regular spectator at Felinfoel RFC, his home village’s amateur club and was president of his beloved Scarlets.

Bennett was as unassuming a presence on the touchline at Felinfoel as he was warm and approachable in the media room at the Principality Stadium.

He wore his greatness lightly, generous with his time with fans, journalists and just about anyone he ever met.

While Bennett himself may never have sung his own praises, the sporting world recognised his special quality.

He was inducted to the World Rugby Hall of Fame in 2005 and will be forever remembered as one of the best to play the game.