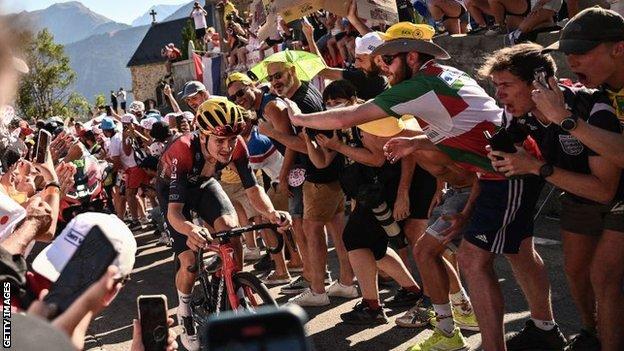 Tom Pidcock won his maiden Tour de France stage in style with a solo victory atop the iconic Alpe d’Huez.

And Pidcock, making his Tour debut aged 22 for Ineos Grenadiers, became the youngest winner on the Alpe d’Huez.

It sent the world cyclo-cross champion and Olympic mountain bike champion back into the top 10 overall, as Jonas Vingegaard retained the yellow jersey.

Froome, 37, was challenging for a stage win for the first time since suffering severe injuries in a crash in 2019.

Pidcock is only the second Briton to win on the Alpe d’Huez after Geraint Thomas in 2018, when a stage last ended there.

“It’s not bad that, is it? If I get dropped every other day, I don’t care,” Pidcock joked.

“It was one of my best experiences in cycling, it was unreal – slaloming through people’s flags and fists [on the final climb, which was packed with raucous spectators].”

Thomas, who went on to win the Tour in 2018, finished seventh on Thursday to leave the 36-year-old Welshman third overall.

Two-time defending champion Tadej Pogacar finished fifth on the stage to move from third to second overall after losing the yellow jersey to Vingegaard on stage 11.

Both Pogacar and Thomas are now almost two-and-a-half minutes adrift of the Dane.