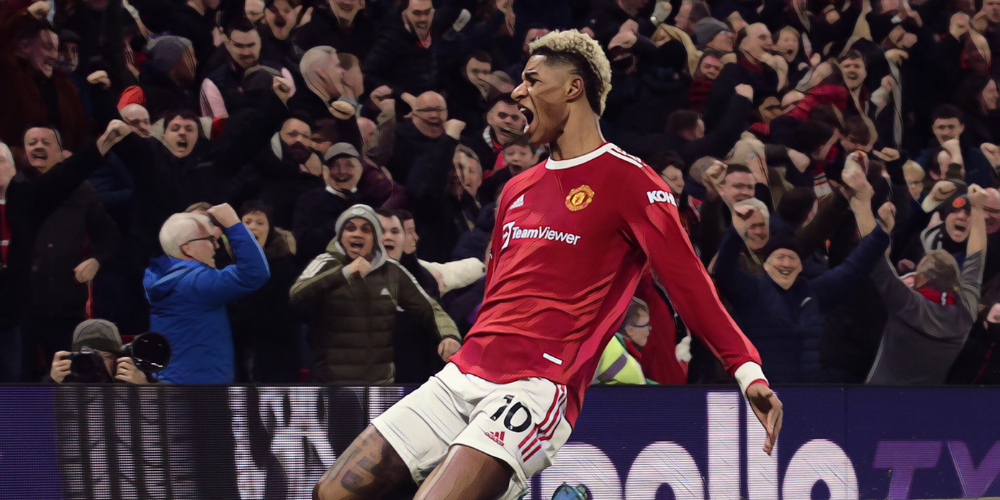 Our weekly Premier League awards honour the best – and worst – of the football action from the weekend.

How big a goal could Marcus Rashford’s late winner be in Manchester United’s season?

The Red Devils had looked set to be frustrated in their bid to beat West Ham and move above their opponents into the Premier League’s top four, before Rashford’s stoppage-time tap-in snatched three points and sparked euphoria around Old Trafford.

The forward has been on the receiving end of criticism this season after struggling to find his form, but it’s now two in two for the 24-year-old with his latest a huge goal for Ralf Rangnick’s side.

United’s win moved them above West Ham and into the Champions League places, whilst dropped points for Arsenal and Tottenham on Sunday made it a dream weekend for the home side.

With favourable-looking fixtures to come in the coming weeks, Rashford’s dramatic intervention could be the kick-start behind a sustained top-four push.

No matter how hard the champions tried and tried against Southampton this weekend, there was little room through the Saints’ resistance for Manchester City at St Mary’s.

Aymeric Laporte’s goal ultimately salvaged a point for Pep Guardiola’s side who dominated possession, but the performance of Mohammed Salisu contributed to the home side earning a share of the spoils.

The 22-year-old has taken time to adapt to the Premier League since his arrival from Valladolid, but is growing in confidence and importance to this side and produced his best performance for Southampton against the league leaders this weekend.

We’re running out of adjectives 😅 pic.twitter.com/6evxv3SbfI

The centre-back appeared almost everywhere at times as he threw himself into challenges and blocks, frustrating City’s forward line with a series of well-time interceptions and a huge 14 clearances – the second-highest amount in a Premier League game this season.

Salisu also now leads the league for interceptions and won 9/10 duels against City this weekend, a dominant display from a defender with huge potential.


Goal of the Week

It was a weekend of great goals in the Premier League, from instinctive finishes to stunning strikes from distance. Joao Moutinho’s brilliant one-two and outside of the boot strike for Wolves deserves an honourable mention, as does Josh Sargent’s first goal in English football as the 21-year-old flicked home a wonderful effort for Norwich.

Hakim Ziyech earns the honours this week, however, after opening the scoring in Chelsea’s win over Tottenham with a sublime effort from distance.

The Chelsea man cuts in on his left foot and guides his shot past a rooted Hugo Lloris to give the hosts the lead! pic.twitter.com/uxyMWXzZpJ

The Moroccan boasts a wand of a left football and, afforded too much space on the edge of the area, curled home a postage-stamp effort into the top corner to give Chelsea the lead.

Hugo Lloris could only stand and watch as Ziyech picked his spot, capping an impressive all-round performance with a goal of the highest order.

Miss of the Week

Raheem Sterling endured a performance to forget as Manchester City were held at Southampton, with the winger withdrawn after a forgettable first hour at St Mary’s.

Sterling wasted a glorious chance to equalise in the first half of the clash, somehow seeing his effort saved by Fraser Forster from point-blank range.

Phil Foden’s cross had found its way to an unmarked Sterling on the edge of the six-yard box, but a tame finish allowed Forster to sprawl across and deny the England international.

Manchester City should be level but Fraser Forster gets in the way of the shot! ⛔ pic.twitter.com/dVjn84QkN4

Stat of the Week

Jonjo Shelvey’s winning goal has given Newcastle hope of a great escape this season, the midfielder firing home a free-kick as the Magpies won 1-0 at Leeds.

The goal was the latest strike from distance from the 29-year-old, who has now scored a huge 61% of his Premier League goals from outside the area.

Remarkably, the only two players to have scored 20+ goals in the division and boast a superior percentage of goals from distance are also both former Newcastle players, with David Ginola (67%) and Laurent Robert (65%) leading the rankings.

61% – Jonjo Shelvey has scored 61% of his Premier League goals from outside the penalty area (14/23); of players with 20+ goals in the competition, only David Ginola (67%) and Laurent Robert (65%) have a higher such ratio. Magpies. pic.twitter.com/TzI7cioP7G

Quote of the Week

Alisson was named man of the match for Liverpool after his heroics helped the Reds to a 3-1 win at Crystal Palace, the goalkeeper in excellent form as the Eagles threatened a comeback in the capital.

For the Brazilian, however, it was just another day at the office with Jurgen Klopp having revealed the 29-year-old’s laidback attitude to his star showing.

Emmanuel Dennis has been one of the finds of the season for Watford with eight goals and five assists for the Hornets, but the Nigerian has been below his best at a crucial time in the club’s season.

Friday night football served up the proverbial six-pointer as Watford hosted Norwich at Vicarage Road, with the home side suffering a humbling 3-0 defeat to drop into the relegation places.

Dennis’ contribution to the cause proved minimal and he handed Watford a mountainous task after being sent off at 2-0, the forward picking up two yellow cards to be sent for an early bath.

It continues a poor disciplinary record for the 25-year-old who now has six bookings and a red card from his 19 appearances in the Premier League this season.


Watford’s woeful performance has also piled the pressure on Claudio Ranieri, who has picked up just seven points from his 13 games in charge. That haul is exactly the same amount as predecessor Xisco managed from his opening seven games before the familiar axe fell at Vicarage Road.