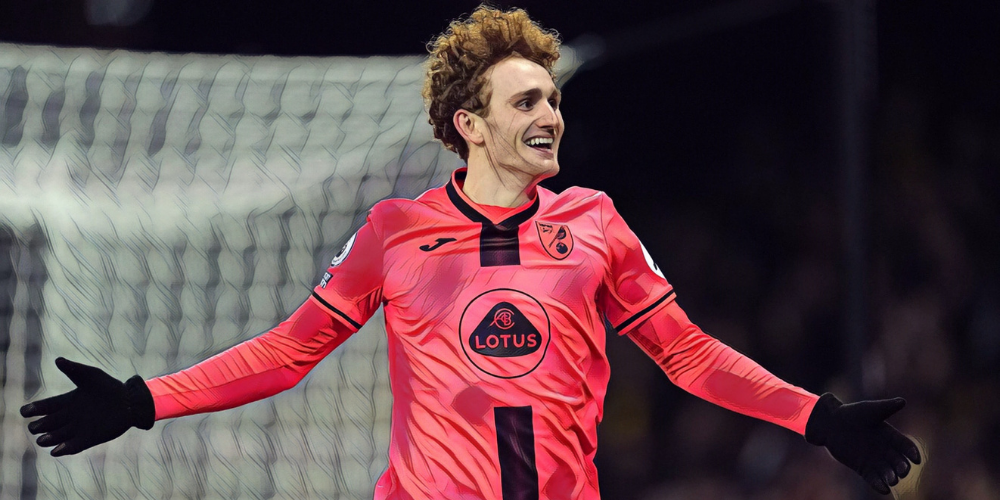 Each week we delve through the Premier League’s weekend action and compile our divisional Team of the Week, with the latest round of fixtures including late drama and huge results.

Chelsea ended their run without a win after beating Tottenham at Stamford Bridge, whilst Manchester United left it late to snatch a crucial three points against top-four rivals West Ham.

Liverpool closed the gap on Manchester City after beating Crystal Palace, the latter having seen their winning run ended with a 1-1 draw at a stubborn Southampton side.

Elsewhere it was Norwich who won the big battle at the bottom with Watford, the Canaries securing back-to-back wins to move out of the Premier League’s relegation places for the first time this season.

Following the latest fixtures we’ve compiled a best XI from the stand-out performers, here is The Football Faithful’s Premier League Team of the Week.

Alisson ensured there was no comeback for Crystal Palace this weekend, the Brazilian making a string of saves as the Eagles threatened a fightback at Selhurst Park.

Liverpool had controlled the opening exchanges to open up a two-goal lead, but soon found themselves under pressure from the hosts with Alisson making strong saves from Jean-Philippe Mateta and Michael Olise.

He was there again to save from Olise in the second half and got down well to keep out a backheeled effort from Odsonne Edouard. Without him, it could have been a different story for Liverpool who escaped South London with a 3-1 win.

The right-back position is Diogo Dalot’s to lose at Manchester United with the 22-year-old producing another impressive outing during the Red Devils’ 1-0 win over West Ham.

Dalot has been given his chance under interim manager Ralf Rangnick and followed a strong showing at Brentford with another this weekend, winning 7/11 duels, making six ball recoveries and winning four tackles.

The defensive side of his game seems to be improving with regular exposure to first-team football and given his superiority in forward areas to Aaron Wan-Bissaka, it is a combination that should earn him an extended run in the side.

Rangnick has already shown a willingness to hand lesser-profile players in his squad a chance and Dalot is one grasping his opportunity at present.

Mohammed Salisu produced his best performance in a Southampton shirt this weekend, the centre-back dominant defensively as the Saints held Manchester City to a 1-1 draw at St Mary’s.

The 22-year-old appeared everywhere as he continually got his head and feet to the ball first, winning 9/10 duels and making a huge 14 clearances – the second-highest amount recorded in a Premier League fixture this season.

We’re running out of adjectives 😅 pic.twitter.com/6evxv3SbfI

The Ghanaian’s improving form has seen him become a key figure for Southampton and his 53 interceptions – including four against City this weekend – are a league-leading total in the Premier League this season.

It has taken a little while for Salisu to find his feet in English football but the defender appears to be getting better with each performance.

Antonio Rudiger loves playing against Tottenham and was in fine form once again as Chelsea secured an important 2-0 win against their London rivals.

Rudiger is impressive in possession and even better without it, dominating his duels defensively and rampaging forward in signature fashion to join the Chelsea attack.

Everything you need for a happy Sunday: derby win & a clean sheet 🙌🏾🤞🏾 #Hustle #AlwaysBelieve pic.twitter.com/32ofeBnvex

The Germany international’s aggression proved the perfect compliment for the evergeen class of Thiago Silva and the argument that he isn’t as effective in a back four should be over now.

His contract situation has become a major headache for Chelsea and should a new deal not be agreed his exit would represent a massive blow ahead of next season.

Andy Robertson continued his run of creative form for Liverpool with two assists at Crystal Palace, the left-back now trailing only teammates Trent Alexander-Arnold and Mohamed Salah for goals created in the Premier League this season.

The Scotland captain now has seven assists in his past eight league appearances, his first at Palace coming after his corner was powered home by Virgil van Dijk for the game’s opening goal.

Most assists in the Premier League this season:

Robertson then picked out Alex Oxlade-Chamberlain with a floated cross as Liverpool doubled their advantage and mixed his forward influence with defensive work as he dealt with the threat of Michael Olise.

Is this the win that starts Newcastle’s great escape?

Eddie Howe’s side secured just their second win of the season at Leeds, but it’s one that moves the Magpies within one point of Norwich, four behind Everton and seven adrift of their beaten opponents at Elland Road.


Jonjo Shelvey was at the centre of Newcastle’s performance with the midfielder so often the club’s source of creativity, first stinging the palms of Illan Meslier before firing home the winner from a free-kick.

Shelvey’s strike needed some unconvincing goalkeeping from Meslier to find its way into the net, but it was a stroke of luck Newcastle needed and one that has increased belief over Premier League survival.

The veteran midfielder continues to add a touch of class to the Wolves midfield and was outstanding again this weekend, scoring one and providing another as Bruno Lage’s side closed the gap on the top-four chasing sides above them.

Moutinho’s goal was a moment of magic from the 35-year-old, a neat one-two on the edge of the area before firing home a sublime strike with the outside of his right boot.

He later teed up Ruben Neves to score the winner and Wolves – with four wins and a draw from their past five fixtures – continue to fly under the radar in the race for Europe this season.

Buendia produced another improved showing as Aston Villa won 1-0 at Everton this weekend, with the midfielder drifting into dangerous areas and working hard to regain possession.

The Argentine’s confidence appears to have lifted in recent weeks and he was willing to take sight of goal when the opportunity presented itself at Goodison Park.

This was a performance that Buendia will hope to build on and a fine afternoon’s work was rewarded with the game’s only goal, getting across Andre Gomes at the near post to flick home Lucas Digne’s delivery and secure three points for Steven Gerrard’s side.

Handed another start after his goal against Brighton in midweek, the change to a 4-3-3 formation for Chelsea allowed the Moroccan an opportunity to shine in his favoured position on the right.

He proved a menacing threat for Tottenham throughout as he interchanged positions with Mason Mount, whilst his shooting proved problematic as he forced Hugo Lloris into a first-half save.

The Chelsea man cuts in on his left foot and guides his shot past a rooted Hugo Lloris to give the hosts the lead! pic.twitter.com/uxyMWXzZpJ

The Spurs goalkeeper had no chance as Ziyech opened the scoring, however, a brilliant bending effort into the top corner that provided a reminder of the quality and technique the 28-year-old’s left foot possesses.

Norwich are out of the Premier League’s relegation places after back-to-back wins, the Canaries thrashing Watford 3-0 in a huge clash down at the bottom.

Josh Sargent was the catalyst for their success with his first goals for the club, scoring his first in Norwich colours with a wonderful improvised finish as he flicked in Teemu Pukki’s cross in off the underside of the crossbar.

The 21-year-old then netted a second after rising at the back post to head home and will hope this can be the start of a purple patch after a difficult adaptation to the Premier League.

Broja keeps on impressing during his loan spell at Southampton, the forward again proving a handful as the Saints held Manchester City this weekend.

The 20-year-old stretched the visitor’s defence and took his disallowed goal – ruled out by the offside flag – in superb fashion, the Albanian improving his chances of a return to Chelsea with each performance for Southampton this season.

The Saints, however, will be keen to keep him on a permanent basis with Broja flourishing amid regular minutes in Ralph Hasenhuttl’s side.