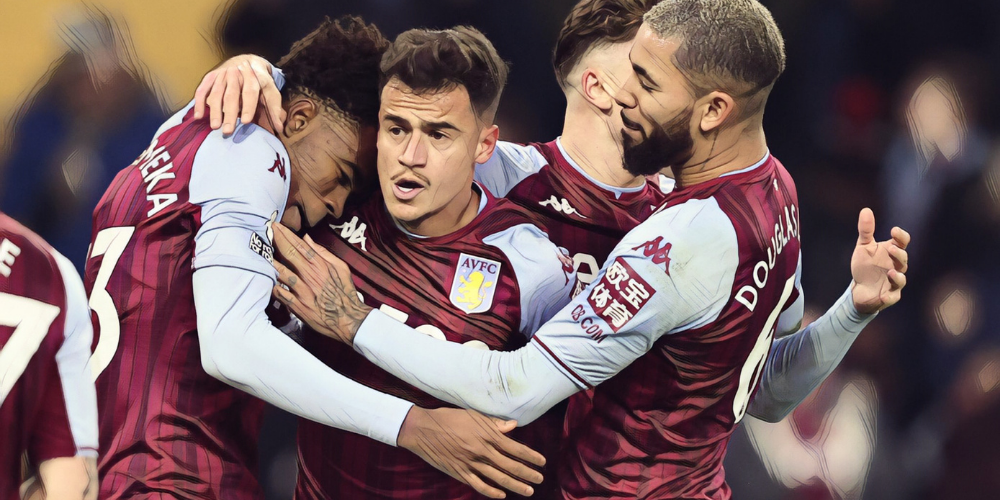 Our weekly Premier League awards honour the best – and worst – of the football action from the weekend.

There are times when the lines between elite sport and fiction seem to blur and there was a sense of inevitability when Philippe Coutinho announced himself as an instant Aston Villa favourite this weekend.

The marquee arrival has found himself in the surprise surroundings of Villa Park after a record-breaking move to Barcelona failed to work out as hoped, with the presence of ex-teammate Steven Gerrard as manager only adding further to the narrative.

Introduced for his debut with Villa trailing 2-0 to Manchester United this weekend, the Brazilian – alongside Jacob Ramsey – proved the catalyst for a stirring comeback.

He was involved in Villa’s first goal before finding himself in the right place at the right time just five minutes later, bundling in an equaliser from close range to spark wild celebrations from the home crowd.

Dream debut for Viila’s new signing, he’s come off the bench and grabbed the equaliser! 💥 pic.twitter.com/Q0yKKAWFbo

It was far from a vintage Coutinho goal as the midfielder tapped home an easy finish, but it could be the start of a renaissance for a talent who has lost his way in recent seasons.

Jack Harrison has been a target for criticism this season with the winger having failed to build on an encouraging first season in the Premier League, with the 25-year-old’s end product – or lack of – this season having often earned groans around Elland Road.

Harrison scored his first league goal of the season against Burnley last time out, before proving the hero of Leeds’ enthralling 3-2 win at West Ham after netting a first career hat-trick.

His first came with a sweet strike across goal on his left foot and he was a threat throughout, working hard on the flank and looking dangerous for the visitors.

Harrison bundled in a second after West Ham levelled, before scoring the match-winner with a delightfully taken third after the Hammers had once again equalised through Pablo Fornals.

It was an impressive performance from a Leeds side short of senior stars and Harrison’s clinical showing moved Marcelo Bielsa’s side further clear of the relegation places.

Goal of the Week

Is James Ward-Prowse the best free-kick taker in world football?

The Southampton midfielder is certainly compiling a compelling case for that accolade after smashing in another stunning set-piece during the Saints’ defeat at Wolves.

Ward-Prowse showcased the variety in his technique with a brilliant knuckleball effort this weekend, the latest in a long line of fantastic free-kicks from the England midfielder.

Southampton captain James Ward-Prowse stepped up to score a sensational free-kick in the Saints’ Premier League defeat to Wolves.

He now has now scored from 12 direct free-kicks in the Premier League, with only David Beckham (18) having ever netted more.

Miss of the Week

David Moyes was not shy on expressing his views on Jarrod Bowen’s stoppage-time miss for West Ham this weekend, the winger spurning a glaring opportunity in the final seconds of the Hammers’ 3-2 defeat to Leeds.

Bowen has been in brilliant form this season and continued his run with a goal this weekend, but missed the simplest of chances to double his tally and rescue a point for West Ham.

Michail Antonio’s cross deflected into the path of the 25-year-old, who somehow contrived to chest the ball over the crossbar from inside the six-yard box.

It was a huge chance wasted in what could prove a costly defeat for West Ham in their bid to secure a top-four finish and Champions League football.

Save of the Week

Manchester City controlled their clash with Chelsea for large periods at the Etihad, with the champions securing a 1-0 win that leaves them firmly in control of the title race.

City were dominant in possession against a Chelsea side that lacked threat further forward, but Pep Guardiola’s side were thankful for the concentration and athleticism of Ederson during a vital moment.

The Brazil international made a huge save from Romelu Lukaku with the game goalless, reading Lukaku’s intention to palm away his effort after the Chelsea forward raced through on goa.

50% – Ederson has now kept a clean sheet in exactly 50% of his Premier League games (83/166), making him the only goalkeeper with 100+ appearances in the competition’s history to record a shutout in as many as half of them. Muro. pic.twitter.com/Yri3ZW4hBl

It was a pivotal moment in a game that City deserved to win and a reminder that Ederson remains one of the best in the business when called upon.


Quote of the Week

Rafael Benitez’s reign at Everton is over, a manager who was never the right fit parting ways with the club after an unhappy marriage at Goodison Park.

Having faced a fight to convince the fanbase given his previous allegiances to Liverpool, a woeful run of form and performances – including a 2-1 defeat at Norwich this weekend – saw the board pull the trigger and sack the Spaniard.

Benitez expressed his regret at failing to revive the club’s fortunes in a statement following his sacking and suggested he underestimated the ‘magnitude of the task’ at Everton.

“My love for this city, for Merseyside and its people, made me accept this challenge, but it is only when you are inside that you realise the magnitude of the task.

“From the very first day, my staff and myself worked as we always do, with commitment and full dedication, we didn’t only have to get results, but we also had to win over people’s hearts.

“The road to success isn’t easy and sadly, nowadays in football there is a search for immediate results and there is always less and less patience; unfortunately circumstances have determined the results and it won’t be possible to continue this project.”

These are difficult times for Everton and Farhad Moshiri finds himself at a crossroads with the club, having made the decision to sack Rafael Benitez after just six months in charge.

Benitez was a hugely unpopular appointment and a gamble that has backfired, with the Spaniard winning just one of his last 13 league games in charge of the Toffees.

Since Farhad Moshiri took over Everton:

Benitez deserves a large amount of the blame for Everton’s woeful record – losing to all three promoted sides this season – and poor performances, but Moshiri’s decision to sack the manager just days after handing him significant funds to sign Vitaliy Mykolenko and Nathan Patterson is another example of the club’s mismanagement.

Mykolenko endured a difficult debut at Norwich and will have to improve to replace Lucas Digne, a fan favourite pushed out of the exit door last week after a fall-out with the now sacked Everton boss.

Everton are just six points above the bottom three and edging ever closer to a relegation dogfight, Moshiri’s next appointment must be the right one, with the club’s Premier League status at stake.

Read Also – FFP: It feels unfair that Newcastle must be sensible and shrewd while living out a dream