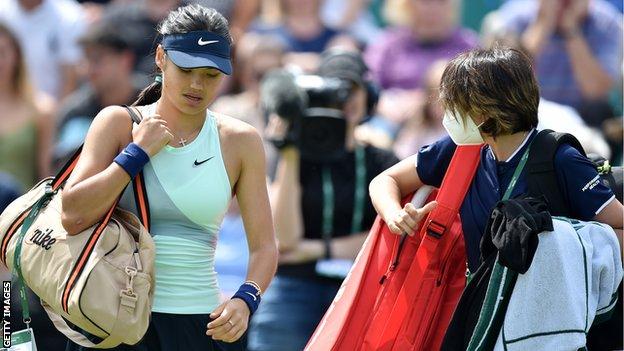 Emma Raducanu will not play at next week’s Eastbourne International, leaving her short on grass-court preparation before Wimbledon.

Britain’s US Open champion managed just seven games against Viktorija Golubic at last week’s Nottingham Open before retiring with a side injury.

The 19-year-old had until 16:00 BST on Friday to request a Eastbourne wildcard but did not appear on the list.

Raducanu reached the fourth round at Wimbledon as a wildcard last year.

This year’s tournament, where Raducanu will be among the top 10 seeds, begins on 27 June.

Raducanu has struggled with injuries and a lack of consistency since her stunning run to the title in New York last September.

She is yet to win more than two matches at a tournament since her US Open win and has had three mid-match retirements this year.

The world number 11 managed just 35 minutes against Golubic after injuring her left side early in the match and she then missed this week’s Birmingham event.

Harriet Dart, Katie Boulter and Jodie Burrage have all received main-draw wildcards for Eastbourne as reward for their strong grass-court performances.

Dart and Boulter reached the quarter-finals of the Nottingham Open and Birmingham Classic respectively, while Burrage made the last 16 at Nottingham.

Seven-time Wimbledon singles champion Serena Williams will make her return to the WTA Tour in the doubles at Eastbourne after a year’s absence.